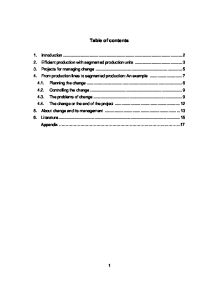 From Production Line to Segmentation of Production

It is not obvious that the loss of responsibilities is not accompanied by a loss of power. However, those with "fear for subject" are anxious that they might loose reputation, end up with a smaller budget and so on. It has to be mentioned that "Angst" is a rather peculiar word for what is meant by Uebel and Helmke. They describe the common place that change has its pros and its cons. While change brings some advantages, some advantages of the old times will be lost. In other words, change may become a trade-off or worse, change might mean redundancy. Therefore, it is obvious from the very beginning that change management has to deal with problems. Problems are not something that arises as a matter of bad circumstances. Problems are the natural companion of change. In company R there are problems. The change of the production modus has been scheduled for spring and that was a mistake. In spring the demand for sport cars is high and a high demand and a different work environment is too much. The employees faced with frequent delays and the necessity to work overtime is dissatisfied. Resistance rises to protest. It starts with unofficial meetings held be employees and ends up in strike. The production stands still and so does the project. Change, it seems, has stopped. Uebel and Helmke write a lot about "Angst" (fear) and the different shapes it may use, and the risks "Angst" holds for the success of the project. But, as is the fact in company R, what can one do, if the problems are that massive that the project can be doomed to failure? Uebel and Helmke provide no answer. Instead they pronounce the value of plans for the crisis. One has to formulate "worst-case" scenarios within those plans (Uebel & Helmke 2003: 428). Worst-case scenarios may be back or forward oriented. ...read more.

Likewise, it can occur at three levels: across organizations, across functions and within functions (see Figure 2). Horizontal process redesign sees reengineering as a key activity at all levels of the organization. However, in order to avoid sub-optimisations, one should start at the top management by mapping out the high-level processes first. In this way, once the subprocesses are considered, their role within the higher level processes are clear. This was not being realized at the "RM" Division: Instead of defining and explaining the new processes to the workforce, only immediately prior to the introduction of the new technology management had explained to the workforce the basic principles behind automation, disregarding the need for understanding the new processes. Particularly a proper introduction of the new core processes across functions was neglected. These mainly included the fact that previously, operators were involved in setting and adjusting machinery and now were simply operating their machines. At the same time, the process control department was to take greater responsibilities, and to be expanded. Would management have explained the new processes properly, operators would have been clearer about their role in regard to the process control department. Instead they found themselves in a favourable position, performing wider functions than management expected of them. In addition, they could use non-optimum methods to achieve the best possible piecework rates for subsequent production and only reluctantly gave up any rights to use the controls. This all can be seen as a result of a missing explanation of the redesigned core processes to the workforce. The second major problem was that of re-establishing piecework rates on the new machinery, because operators were enjoying average earnings and resisted this move. At this point it would have been helpful to establish a detailed timeframe in which the phases of the change process are listed, in connection with the procedure of handling the piecework rates during and after each phase. The basic agreement, which was being made, did not serve this purpose. ?? ?? ?? ?? 1 ...read more.