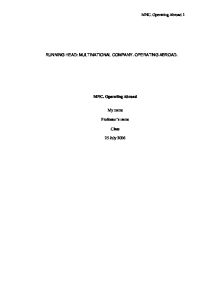 RUNNING HEAD: MULTINATIONAL COMPANY. OPERATING ABROAD. MNC. Operating Abroad My name Professor's name Class 25 July 2006 The company I'm planning to create is a Limited Liability which exports roasted and ground coffee directly, purchases coffee beans directly from the manufacturer in Brazil, Colombia (top coffee producing countries), then sells overseas. The given Export Management Company (EMC) is an independent firm which may function as an exclusive export sales department, representing the product along with various non-competitive manufacturers and operating on a commission basis. As the world coffee market is a quite developed one, the company should use the adaptation strategy when entering the market to coordination the company's operation with the existing market environment. The company establishes a strong foreign distribution system, hires experts on business conditions abroad and focuses on Ukraine as a country to export into with further opportunities of growth. Actually we have several ways of selling our coffee in Ukraine to choose from. Direct sales to companies working in Ukraine will allow us to control over where our coffee is sold, but such direct sales may be quite cost effective only if we have a small number of orders, because otherwise we'd have to hire more staff and this may limit our income. Besides, we'd have to conduct the marketing of our coffee out from the U.S. and this makes customer relations more difficult. Selling to Ukrainian distributors seems to be more advantageous because it allows selling to a wider range of buyers and doesn't require extra employees to deal with individual sales. However, taking into consideration that a distributor will be taking a percentage of each products cost, it is obvious that the profit our company gets from each item is lower. However, as we start our operating as a small company, such a way of selling seems to be the most preferable. Having successfully operated in Ukraine for some period of time, the company may consider establishing there a subsidiary in order to widen the range of goods and services it offers. ...read more.

The bid rate ranged from 4.73720 to 4.84820 during the given time period. (FXHistory, Time period: 06/20/06 to 07/20/06) National economy of Ukraine is one of the key factors to affect the value of hryvnas. That's why it is extremely important to consider political and economical situation. Instability or unclearness of some legislative regulations, laws and policies may cause great problems for a foreign company. However, a domestic firm may also face such problems as state policy changes, increasing taxation, and change of customers' demands. In such a situation the only way to solve problems is reorientation, transformation, adjusting to newly arisen market conditions. But at the same time a company which has additional markets abroad will lose less in the same situation. The reason for it is the fact that while the domestic office is working on the development of new profitable managing strategies, foreign subdivisions of the company are working and getting profits while a purely domestic company puts all its resources for solving the current problem and has no additional income. A company operating overseas will certainly get interest and dividends from its international investments and realize capital gains. But the fact is that the firm won't necessarily gain a positive total return, or that the return will be as strong as the return of a company making the same investment with euros, yen, or pounds. This happens because most currencies have no fixed value - that's why currencies float one against another. Sometimes the dollar is stronger than other currencies, sometimes it's comparatively weaker. When the dollar is strong, the company will have to spend fewer dollars in order to get a particular amount of another currency, and, when the dollar loses value; such an operation will be more expensive. Currency futures are often used to hedge currency exchange risks. It is a futures contract which enables a company to exchange hryvnas for dollars on some certain day in future at a price that is fixed on a last trading day. ...read more.

Conclusion Entering an international market requires any company to use certain specific and unique for each country strategies to gain an immense success. Having discussed and analyzed some of the most important risks a multinational company may face, we can come to a conclusion that even if there is only one serious competitor in the country's market, the company should never forget that it is a guest in the country and, hence, should first of all study the country's internal political and economical situation, some national culture features, tastes and demands of its citizens before offering any product or service. The mistake of some companies entering foreign markets consists in using the same strategies that were used in their home countries. Yes, they were successful, but one must consider that a foreign market is a completely different thing: different culture, different legislative regulations, laws and policies, different tastes. National culture - a concept which includes a great number of specific issues - is also one of the first factors to be evaluated when starting business abroad. And, notwithstanding the fact that purely domestic company faces less number of risks, it is as risky as a multinational one. Besides that, I think a multinational company, despite larger number of risks, has more advantages in comparison with a domestic one. And the most serious issue for a company to consider when starting operating in a foreign country is actually inner political and economical situation of the given country which are to be deeply analyzed. Hence, I believe, in situation when a company is deciding whether to start operating abroad the most important issue is the political and economical climate of the target country because all the other risks may be either managed or even be of some positive use for the company. In summary, I would conclude that domestic companies face not less different risks than multinational ones, and if a company takes a decision not to work overseas, such a decision may have been caused mostly by independent political and economical risks in the particular country. ...read more.