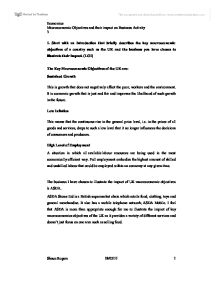 Macroeconomic Objectives and their impact on Business Activity

1. Start with an introduction that briefly describes the key macroeconomic objectives of a country such as the UK and the business you have chosen to illustrate their impact. (LO1) The Key Macroeconomic Objectives of the UK are: Sustained Growth This is growth that does not negatively affect the poor, workers and the environment. It is economic growth that is just and fair and improves the likelihood of such growth in the future. Low Inflation This means that the continuous rise in the general price level, i.e. in the prices of all goods and services, drops to such a low level that it no longer influences the decisions of consumers and producers. High Level of Employment A situation in which all available labour resources are being used in the most economically efficient way. Full employment embodies the highest amount of skilled and unskilled labour that could be employed within an economy at any given time. The business I have chosen to illustrate the impact of UK macroeconomic objectives is ASDA. ASDA Stores Ltd is a British supermarket chain which retails food, clothing, toys and general merchandise. It also has a mobile telephone network, ASDA Mobile. I feel that ASDA is more than appropriate enough for me to illustrate the impact of key macroeconomics objectives of the UK as it provides a variety of different services and doesn't just focus on one area such as selling food. 2. Explain the different causes of price rises and analyse their impact on your chosen business. (LO 1) Cost Push Inflation This type of inflation is caused by costs rising for firms - which are in turn passed on to consumers in the form of higher prices. Very importantly, this type of inflation can occur irrespective of the state of the economy. ie AD might be fairly weak, and there could even be relatively high unemployment, cost -push inflation is still possible. ...read more.

Therefore in order to calculate economic growth, GDP, which is the total value of production in an economy, needs to be calculated. There are three ways of doing this, The Expenditure Method: Adding up all of the expenditure on outputs over a period of time, usually a year. It is necessary to add expenditure to exports and deduct expenditure on imports. (This is because the sale of exports represents UK output and creates incomes in the UK, whereas the expenditure on imports is spending on goods and services made abroad and creates incomes for people overseas). It is also necessary to deduct indirect taxes and add subsidies (a payment made by the government to consumers or producers that reduces the market price of a good or service), in order to get a value which corresponds to the incomes generated in the production of the output. Inflation needs to be removed in order to identify real changes. The Income Method: Adding up everyone's income. It is important to include only payments received in return for providing a good or a service. It is often difficult to distinguish between 'productive work' e.g factory work, and 'unproductive work' e.g. housework, and whether their incomes should be included. The problem with this method is people do not always officially declare all of their income, so there can sometimes be a difference between income and expenditure. This is known as the 'black economy.' Transfer payments, which are transfers of income from taxpayers to groups of individuals for welfare benefits, pensions, and unemployment, are not included because they are simply transferred from one group of people to another without the recipients adding to production. The Output Method: Adding together the output of all firms, and estimating the total value of what is produced in a year. When using this method it is important to avoid counting the same output twice, e.g. ...read more.

7. Conclude this assignment by recommending policies that the current Government should continue or introduce to encourage future economic growth. (LO2) I believe that the current government should continue to use the monetary policy and fiscal policy. Monetary and fiscal policies are what helps keep the nations economy stable. The policies are used to prevent long periods where there is high unemployment, inflation, and prices, along with low wages and investment. I will now go into detail about each of the policies which will show why they are of vital use to the government in encouraging future economic growth. Fiscal policy involves the use of government spending, taxation and borrowing to influence both the pattern of economic activity and also the level and growth of aggregate demand, output and employment. Changes in fiscal policy affect both aggregate demand and aggregate supply. Monetary policy is the attempt to control macroeconomic variables in an economy through the use of interest rates. Fiscal policy is the attempt to influence the level of economic activity through changing taxation and government spending. The objectives of the government are: * Low inflation * Strong economic growth, but, not inflationary growth * Reduce unemployment * Avoid large deficit on current account balance of payments In the UK, Monetary policy has been given to the Bank of England. Therefore, the Bank of England has independence in setting interest rates. The government only set the inflation target of 2% inflation. If the MPC predict inflation will rise above the inflation target then they will increase interest rates. Higher interest rates reduce demand and prevent the economy expanding too fast. Fiscal policy is not used so much in modern economies, but, in theory can be used to prevent recessions or prevent inflation. If inflation is a problem the government can increase tax rates and cut spending. This will reduce aggregate demand, and therefore, reduce inflationary pressure. In a recession, the government can increase AD, by increasing government spending and cutting taxes. Lower taxes increase disposable income. This helps increase economic growth and reduces unemployment. ...read more.