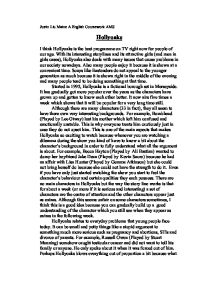 My opinion on Hollyoaks.

Justin Liu Maine A English Coursework AMS Hollyoaks I think Hollyoaks is the best programme on TV right now for people of our age. With its interesting storylines and its attractive girls (and men in girls cases), Hollyoaks also deals with many issues that cause problems in our society nowadays. Also many people enjoy it because it is shown at a convenient time. Soaps like Eastenders do not appeal to the younger generation as much because it is shown right in the middle of the evening and many people tend to be doing something at that time. Started in 1995, Hollyoaks is a fictional borough set in Merseyside. It has gradually got more popular over the years as the characters have grown up and gotten to know each other better. It now airs five times a week which shows that it will be popular for a very long time still. Although there are many characters (33 in fact), they all seem to have there own very interesting backgrounds. ...read more.

a set of characters are the centre of attention and the other characters appear just as extras. Although this seems unfair on some characters sometimes, I think this is a good idea because you can gradually build up a good understanding of the character which you still see when they appear as extras in the following week. Hollyoaks relates to everyday problems that young people face today. It can be small and petty things like a stupid argument to something much more serious such as pregnancy and abortions, STIs and divorce of parents. For example, Russell Owen (Played by Stuart Manning) somehow caught testicular cancer and did not want to tell his family or anyone. He only spoke about it when it was forced out of him. Perhaps Hollyoaks blows everything out of proportion a bit because what you tend to see is the very worst of these subjects and not people who get off lightly and only experience the surface of these problems. ...read more.

Most of the funnier side of things are done by the teenagers and younger people generally (which makes sense because who else would do funny things?) and take place mostly in the more crowded places like in a bar (which also makes sense because you tend do try to be funny when socialising). The more serious stuff takes place in quieter places like in people's flats (well where else would you argue and have sex?). I think that the main focus in Hollyoaks is the characters as shown in the title sequence. Also in the title sequence the music gives Hollyoaks a modern feeling with the guitars and drums playing a catchy theme tune. This plays over a load of moving shots that indicate all the different characters. You do not see much of the location which is clever because the village it is set in has no history and so it does not matter where it is set, you would not notice if it was set somewhere else. ...read more.