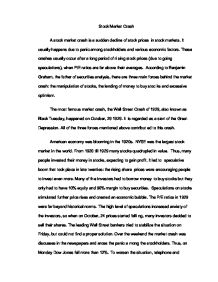 Stock Market Crash A stock market crash is a sudden decline of stock prices in stock markets. It usually happens due to panic among stockholders and various economic factors. These crashes usually occur after a long period of rising stock prices (due to going speculations), when P/E ratios are far above their averages. According to Benjamin Graham, the father of securities analysis, there are three main forces behind the market crash: the manipulation of stocks, the lending of money to buy stocks and excessive optimism. The most famous market crash, the Wall Street Crash of 1929, also known as Black Tuesday, happened on October, 29 1929. It is regarded as a start of the Great Depression. All of the three forces mentioned above contributed to this crash. American economy was blooming in the 1920s. NYSE was the largest stock market in the world. From 1920 till 1929 many stocks quadrupled in value. Thus, many people invested their money in stocks, expecting to gain profit. It led to speculative boom that took place in late twenties: the rising share prices were encouraging people to invest even more. ...read more.

Another famous crash happened on October, 19 1987, also known as Black Tuesday. Several factors contributed to it, however people do not agree what was the main one. This crash was also preceded by the period of strong economy. From 1982 to 1987 DJIA grew from 776 to 2722. World's markets were growing too. There are no obvious reasons for the crash: no major news or causes for panic. The prices started falling since October, 14: DJIA fell 3.82% on Thursday and 4.60% on Friday. It first began in Hong Kong, spread to Europe and affected the US markets as well. The main cause is believed to be program trading, which is the use of computers to control the trading process and portfolio insurance strategies. Computers became an important part of the trading process in the USA, thus some specialists claim that program trading aroused speculative boom and contributed to market crash by allowing the investors blindly sell their stocks. However, this cause can not be the main one, because the crash started in Hong Kong, where program trading was not popular. ...read more.

The rumors spread over the weekend and on Monday many people started selling their stocks in panic. When this market bubble broke the Shanghai's market dropped on February, 27 2007. The drop of the market in China affected the markets all over the world, as many investors who lost in China had to sell their stocks in other markets to cover the losses. Thus, on February 28 2007 world markets fell 2.3% to 4%. The consequences of the crash were not very dramatic and many markets were partially or completely restored in the few days. However, this crash shows us that a disaster can happen if people will keep on investing without caution. Returning back to the three main forces of the market crash I have to admit that they are all present today: the manipulation of stocks is present, although it is more regulated by governments and special organizations like SEC; many people still borrow money to buy stocks and have to respond the margin calls is case the market falls; excessive optimism is present as well - P/E rations are above their historical averages and keep on growing. Thus, I suppose that another market crash might happen in the future, but, hopefully it will not be as huge as the ones in 1987 and 1929. ...read more.

This essay engages superbly with the question, exploring the causes of a stock market crash and evaluating why significant crashes were caused. I liked how they used two historical crashes and one current financial crisis. If this essay wanted to ...

This essay engages superbly with the question, exploring the causes of a stock market crash and evaluating why significant crashes were caused. I liked how they used two historical crashes and one current financial crisis. If this essay wanted to improve, it would have been nice to see some evaluation as to whether the historic crashes could happen again for the same reasons, but this is only necessary as an extension.

The analysis is strong here, and technical terms are used throughout. I would've liked to have seen a bit more explanation of terms such as P/E or institutions such as FDIC - the acronyms are simply not enough to gain the highest marks. What I particularly liked in this essay is how they have explained the effects of each crash, talking about first tier impacts and second tier impacts. A good skill is displayed in describing the 1987 crash, with the essay explaining that the cause is still argued today. It is key in Business and Studies and Economics to show awareness that often there is no right solution or cause, and schools of thought change over time. It could've been relevant to talk about the Lehman Brothers incident in 2008 to extend the argument.

This essay is written well, having a clear structure. I liked how the introduction defined the key terms in the question, and the conclusion relates directly back to the task set. The style could be improved slightly by using terms such as "in hindsight" or "it is now clear that" or "it depends greatly upon" to ensure the top marks are gained. Spelling, punctuation and grammar are strong. An essay to be admired!