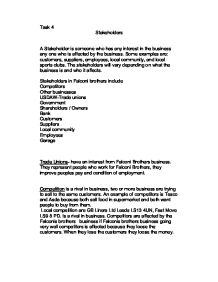 A Stakeholder is someone who has any interest in the business any one who is affected by the business. Some examples are: customers, suppliers, employees, local community, and local sports clubs. The stakeholders will vary depending on what the business is and who it affects.

Stakeholders in Falconi brothers include

Trade Unions- have an interest from Falconi Brothers business. They represent people who work for Falconi Brothers, they improve peoples pay and condition of employment.

Competition is a rival in business, two or more business are trying to sell to the same customers. An example of competitors is Tesco and Asda because both sell food in supermarket and both want people to buy from them.

Others businesses- for example Empire Direct on Roundhay Road  the are have interest because Falconi’s business help them with delivery heavy, electrical items.

Usdaw unions of shops and allied workers. Employees at Falconi Brother might be in a trade unions, this means the trade unions has an interest in the business. Trade unions organisations that represent people at work. The protect and improve people pay and conditions of employment. They also campaign for lows and policies which will benefit working people.

Government- Has an interest from Falconi brothers business because they pay company tax to the government (and road tax far car, business rates for office etc)

Shareholders owners -They are depending on the business because they earning money from the Falconi brother. Partners of the business have invested money and wont a business to be successful the business have run efficiently and the managers will be committed to increasing revenues or controlling the cost of business.

Bank- Is interested in the success of Falconis Brothers business because they pay money to the bank and bank get interest when the business takes out a loan. If the business is successful, more money will come into the bank.

Customer- benefit when Falconi’s business is successful they will get quality and good services from them. Customers will expect products and services to be safe and reliable.

Employees- Can get more opportunity for getting job with them. They also get wages, The employees are very important group who have an interest in falconi brothers business. They will rely upon the falconi brother business to provide them with a regular wage or salary. They hope for job security and safe working conditions and perhaps training.

Suppliers- Is firms that supply that falconi brother business with raw materials components packaging or services will expect to be paid promptly. They maybe also rely upon regular orders to ensure the success of their own business.

Creditors- creditor is a person like falconi brothers owed money, the money for the vans or to business grown well. For example, a bank or a company that gives out mortgage to falconi brother is a creditor. In this case, the creditor is loaning money in exchange for collecting interest payments on the principal. An investor that holds a bond is also considered a creditor.

Society- is a group of humans from a semi-closed system, in which most interactions are with other people belonging to the group. A society is a network of relationship between people. A society ia an interdependent community. 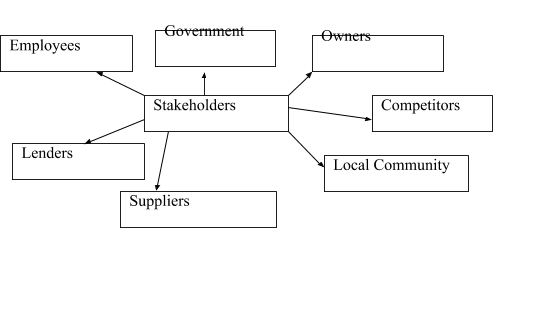 For example Employers seeking higher wages might conflict with the desire by management to cut costs to boost profit and thus satisfy their own ambitions and meet the needs of the shareholders.