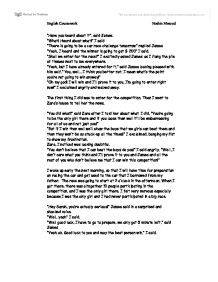 “Have you heard about it”, said James.

“What! Heard about what!” I said

“Shall we enter for the race?” I excitedly asked James as I flung the pile of tissues next to me everywhere.

“Yeah, but I have already entered for it,” said James looking pleased with him self.” You, well… I think you better not; I mean what’s the point you’re not going to win anyway!”

“Oh my god! I will win and I’ll prove it to you, I’m going to enter right now!” I exclaimed angrily and walked away.

The first thing I did was to enter for the competition. Then I went to Zara’s house to tell her the news.

“You did what!” said Zara after I told her about what I did. “You’re going to be the only girl there and if you loose then well it’ll be embarrassing for all of us and not just you!”

“But if I win then well we’ll show the boys that we girls can beat them and then they won’t be so stuck-up all the times!” I exclaimed, banging my fist to show my frustration.

Zara, I noticed was looking doubtful.

“You don’t believe that I can beat the boys do you!” I said angrily. “Well, I don’t care what you think and I’ll prove it to you and James and all the rest of you who don’t believe me that I can win this competition!”

I woke up early the next morning, so that I will have time for preparation on racing the car and get used to the car that I borrowed from my father.  The race was going to start at 2 o’clock in the afternoon. When I got there, there was altogether 10 people participating in the competition, and I was the only girl there. I felt very nervous especially because I was the only girl and I had never participated in a big race.

“Well good luck, I have to go to prepare, we only got 5 minute left,” said James

“Yeah ok. Good luck to you and may the best person win,” I said.

Then of went James; I was feeling so anxious that I will not win and end up embarrassing my self. I put my gear on and went in the car.  I told my self that I must be confidence and prove myself that I can win this competition.

Suddenly, the gunshot went, I and everybody else went zooming like cheaters. I felt so nervous; my hands were shaking so badly that I could feel my bone creaking. It was nearly the end and I was in third place with all my strength I just drove like hell. The next minute I open my eyes and for some reason everyone where cheering and running to me. Zara open the door and screamed that I won.

“You won! I just can’t believe it. “Said Zara as we too were walking to my place.

“Yeah! That’s a great idea. It’s about time you get your own car instead of borrowing your dad’s all the time” replied Zara.

We were around the corner of my place when James boomed into us.

“Yeah I did and congratulation to you. I’m really happy for you but have to go got some things to do”, replied James.

I was opening my door when I saw something behind my father car. I told Zara to go in and told her I had to go and see something.

As I moved behind my father car I wondered what a box was doing there. I opened it and out came a note saying, “The money ain’t yours. I’m supposed to win not you. You will pay back” and in that box there also was a doll with its neck cut out and I think it was blood on there. I was horrified I thought who would do such a think. I was about to tell Zara about it than thought not too. It could have been anyone and didn’t want Zara to get worried. I went back inside and I and Zara just chilled out.

What the heck I thought why someone would be phoning at midnight.

I crept down stairs and pick the phone up.