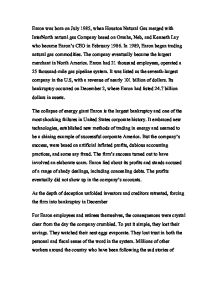 The collapse of energy giant Enron.

Enron was born on July 1985, when Houston Natural Gas merged with InterNorth natural gas Company based on Omaha, Neb, and Kenneth Lay who became Enron's CEO in February 1986. In 1989, Enron began trading natural gas commodities. The company eventually became the largest merchant in North America. Enron had 21 thousand employees, operated a 25 thousand-mile gas pipeline system. It was listed as the seventh-largest company in the U.S, with a revenue of nearly 101 billion of dollars. Its bankruptcy occurred on December 2, where Enron had listed 24.7 billion dollars in assets. The collapse of energy giant Enron is the largest bankruptcy and one of the most shocking failures in United States corporate history. It embraced new technologies, established new methods of trading in energy and seamed to be a shining example of successful corporate America. But the company's success, were based on artificial inflated profits, dubious accounting practices, and some say fraud. ...read more.

First of all, Enron matched employee contributions with substantial amounts of its stock and prohibited employees from shifting that company contributed stock to a different investment until the age of fifty. Second of all, the company's culture actively encouraged accumulation of Enron stock. Enron's top management repeatedly promoted its stock through internal publications and communications. Leaving the question of legality aside for now, it is wrong for executives to enthusiastically recommend their company's stock into their savings. It is wrong for management to convey in internal communications that the company's stock is on the way up when they have reason to believe otherwise. That is not optimism. It is dangerous deceit. As Enron's original divisions continued to rack up financial losses, company leaders devised new schemes to hide the red ink from ever hitting the paper and thus causing their precious stock prices to plummet. ...read more.

This declaration of bankruptcy was the largest in United States History. The last people who are affected by this are the general public who was being provided with electricity by Enron. These people are also investors who lost money in the company. A lot of people are in huge financial debt from the ignorance of these executives at Enron. Ten's of thousands of people saw their pension and investment accounts depleted or destroyed. This scandal has had an enormous impact. If the Enron scandal had never happen and if they would've been extremely strict, they might still be one of Americas top companies and produces billons of dollars. All in all it is clear that the Enron scandal has changed the business world, as we know it. It taught us that even the biggest could come tumbling down at a fast rate. We know how politics, business, and greed all go hand in hand unfortunately and how corrupt corporate America is. ...read more.

In summary, the report is well written. The report states how Enron was a large buisness and the types of financial polices that there undertook. The student also understands the effect on this to their employees and investors. However some ...

In summary, the report is well written. The report states how Enron was a large buisness and the types of financial polices that there undertook. The student also understands the effect on this to their employees and investors. However some points lack detail and the student should link this to potential accounting polices which could have prevented this buisness from going bankrupt. The student states 'Enron was born', although businesses cannot be born. Businesses are created, and this is a strange use of English within the report. This should be corrected to 'created'. On the flip side, the student does state good background knowledge of Enron, which will allow the exmainer to understand the size/scale of the buisness. The student understands that their employees lost their pension savings though the buisness, and there wouldn't be able to claim any of this back, as there wasn't enough assets within the buisness. The report states a number of changes that have occurred within the USA, due to this business. This shows a good understanding of how one company, made the government change a number of laws to ensure that this couldn't occur again.

The student understands that the buisness had poor accounting standards, and there was no profits being generated within the buisness. Although the student doesn't state the potential reasons for this, and doesn't give reference to any accounting policies which could have prevented the errors within there financial statements. The report states that the directors of the buisness, promoted their stock and this increased their share price. Although the report hasn't given any examples of this. It may be useful to include the people involved and the amounts that the share price increased by, and how this effected other investors.

The font size is too large, this should be between 10 - 12. Although I'm assuming that this is either 14 or 16. This should be corrected, as the exmainer may find it slightly too large to read with ease.