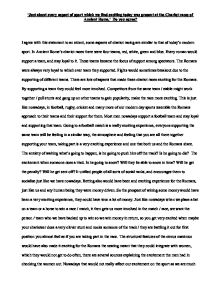 Just about every aspect of sport which we find exciting today was present at the chariot races of ancient Rome. Do you Agree ?

‘Just about every aspect of sport which we find exciting today was present at the Chariot races of Ancient Rome.’  Do you agree?

I agree with this statement to an extent, some aspects of chariot racing are similar to that of today’s modern sport. In Ancient Rome’s chariot races there were four teams, red, white, green and blue. Every roman would support a team, and stay loyal to it. These teams became the focus of support among spectators. The Romans were always very loyal to which ever team they supported. Fights would sometimes breakout due to the supporting of different teams. There are lots of aspects that made these chariot races exciting for the Romans. By supporting a team they could feel more involved. Competitors from the same team / stable might work together / pull stunts and gang up on other teams to gain popularity, make the race more exciting. This is just like nowadays, in football, rugby, cricket and many more of our modern day sports resemble the Romans approach to their teams and their support for them. Most men nowadays support a football team and stay loyal and supporting that team. Going to a football match is a really exciting experience, everyone supporting the same team will be feeling in a similar way, the atmosphere and feeling that you are all there together supporting your team, taking part is a very exciting experience and one that both us and the Romans share. The anxiety of waiting what’s going to happen, is he going to push him off the track? Is he going to die?  The excitement when someone does a trick. Is he going to score? Will they be able to score in time? Will he get the penalty? Will he get sent off? It unified people of all sorts of social ranks, and encourages them to socialise just like we have nowadays. Betting also would have been and exciting experience for the Romans, just like us and any human being they were money driven. So the prospect of wining some money would have been a very exciting experience, they could have won a lot of money. Just like nowadays when we place a bet on a team or a horse to win a race / match, it then gets us more involved in the match / race, we want the person / team who we have backed up to win so we win money in return, so you get very excited when maybe your charioteer does a very clever stunt and nocks someone of the track / they are battling it out for first position you almost feel as if you are taking part in the race. The structural features of the circus maximus would have also made it exciting for the Romans the seating meant that they could integrate with women, which they would not get to do often, there are several sources explaining the excitement the men had in checking the women out. Nowadays that would not really affect our excitement on the sport as we are much more integrated through daily life than the Romans would have been. Therefore these don’t really increase the enjoyment of our sport nowadays. The ‘spina’ would have also made the race very exciting for the Romans, especially the ‘metea’ or turning posts, these would have tested even the best charioteers to their limits, when the charioteers reached the metea they would try and cut in as close as possible to the metea as possible, this could have resulted in a very bad injury or death very easily, if they wear pushed into the metea or turned to closely into the metea, as the charioteers approached the metea the crowd would start to cheer more especially when stunts and tricks were pulled on other charioteers. The Romans also enjoyed the egg markers and dolphin markers; these would have shown them at what lap they were in the race, obviously it would have been important for the Romans to have been able to keep track of how many laps the charioteers were on. Every time a marker went down / up this would have signified it being closer to the end of the race, I think this would have made it more exciting for them because it is that time aspect for them, when time is applied to something it often means pressure, whether it be they only have so long to score a goal or to knock their component of the track / make them win. With every lap it would have made it more exciting for the Romans, as there would be less and less charioteers each time and the race would be getting more violent / heated. Although nowadays although we do have score boards to help us to keep up score I would not say it adds that much to the excitement , only really the time aspect that they have so long left to score / win this game.

In the chariot racing most of the competitors would have been slaves, and of a low social status, they would get sold to other teams and made to compete in races. In a way the charioteers had their own status within charioteering – they had dual status’ if they were good charioteers they would start from nothing a built their way up the charioteers rank, and become well known every time a charioteer won in a race they would receive a percentage of the winnings the rest would go to the stables, they would receive quite a high pay.. This is sort of similar to what we have nowadays for example a footballer might start from nothing and is all of a sudden he is launched into a high status / idolised. In a way the footballers are owned like a slave would be the club / manager owns them and they are sold onto other teams. Just like the charioteers they also receive very high pays. This aspect of charioteering / modern day sport would have made it exciting because you could get to see well known really good charioteers, maybe that you idolised; it’s just like nowadays meeting a really famous footballer like David beck ham something that an average person would find really exciting, because they are iconic figures that people look up to, and you want to see them perform. With chariot racing there is a real danger aspect it seemed the Romans would do anything to try and make their sport more dangerous and exciting, teaching the charioteers to bash into each other, the crowd would cheer loudly if someone was

Have a battle with another charioteer / killed them, the Romans were very blood thirsty. The got thrills out of seeing people hurt and pushing each other close to the edge. Nowadays I don’t think we share the Romans passion quite so much for fighting and death/ blood, although for instance in motor racing when the cars are racing and perhaps giving each other nudges I think we do find it exciting we like to see how far we can push things, and if some one crashed and it was quite a big one every one would sort of be talking about it – did you see that crash? Without realising we get a sort of buss out of it.

I think now looking closely and examining this statement I do agree with it , most of the points I have brung up are connected to chariot racing we share that thrill and excitement the same as the Romans do maybe we just don’t realise it as much / it is a bit more toned down.