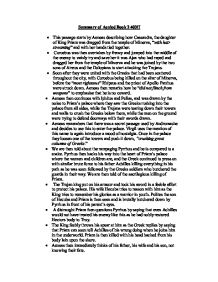 Summary of Aenied Book 2 403ff * This passage starts by Aeneas describing how Cassandra, the daughter of King Priam was dragged from the temple of Minerva, "with hair streaming" and with her hands tied together. * Coroebus was then overtaken by frenzy and jumped into the middle of the enemy to vainly try and save her it was Ajax who had raped and dragged her from the temple of Minerva and he was joined by the two sons of Atreus and the Dolopians to start attacking the Trojans. * Soon after they were united with the Greeks that had been scattered throughout the city, with Coroebus being killed on the altar of Minerva, before the "most righteous" Rhipeus and the priest of Apollo Panthus were struck down. Aeneas then remarks how he "did not flinch from weapons" to emphasise that he is no coward. * Aeneas then continues with Iphitus and Pelias, and was drawn by the noise to Priam's palace where they saw the Greeks rushing into the ...read more.

* The King feebly throws his spear at him as the Greek replies by saying that Priam can soon tell Achilles of his wrong doing when he joins him in the underworld. Priam is then killed with his head hacked from his body lain upon the shore. * Aeneas then immediately thinks of his father, his wife and his son, not knowing their fate. * Aeneas then catches sight of Helen in the temple of Vesta and is infuriated by her. He runs towards her but is distracted by the appearance of his mother before his eyes. She holds him back and tells him to consider his family. * Venus then reveals that the gods are at work at the destruction of Troy, and she tells him that even "Jupiter himself who is rousing the gods against the armies of Troy." * Aeneas then compares the falling of Troy to that of an ancient ash tree and this simile again shows how Virgil uses beauty in vegetation to illustrate the loss of something that was once so great. ...read more.

* Aeneas then calls out his wife's name but to no answer and he continues to search for her. He is confronted by the phantom of his wife who tells him that "these things do not happen without the approval of the gods." * She tells him that he will be exiled for a long time before he goes to the land of Hesperia where he will have a kingdom and a royal bride, and she then fades away into the air as Aeneas is left in tears unable to reply. * Three times he had tried to embrace the phantom of his wife and three times it had disappeared as the night had almost ended. * Aeneas then returns to his family whom have been joined by many other refugees from all directions and are ready to follow him. The Greeks took guard of the city and the remaining Trojans then set off into the mountains led by Aeneas. ...read more.