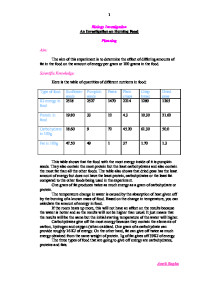 An investigation on burning food.

Biology Investigation An Investigation on Burning Food Planning Aim: The aim of this experiment is to determine the effect of differing amounts of fat in the food on the amount of energy per gram or 100 grams in the food. Scientific Knowledge: Here is the table of quantities of different nutrients in food: Type of food Sunflower seeds Pumpkin seeds Pasta Plain crisps Crisp bread Dried peas KJ energy in food 2518 2527 1470 2214 1280 1265 Protein in food 19.80 33 12 4.3 10.30 21.60 Carbohydrate in 100g 18.60 9 72 45.20 61.30 50.0 Fat in 100g 47.50 49 1 37 1.70 1.3 This table shows that the food with the most energy inside of it is pumpkin seeds. They also contain the most protein but the least carbohydrates and also contain the most fat than all the other foods. The table also shows that dried peas has the least amount of energy but does not have the least protein, carbohydrates or the least fat compared to the other foods being used in the experiment. One gram of fat produces twice as much energy as a gram of carbohydrate or protein. The temperature change in water is caused by the absorption of heat given off by the burning of a known mass of food. ...read more.

The food must be held from the boiling tube at the same length each time. If one food is held closer to the boiling tube then this could alter the whole set of results. The same thermometer and the same types of boiling tubes should be used each time. The test tube must also be changed every time a new food is being burned. The test tube and water must not be hot when each food is being heated up. This is because, the water has to start at the same temperature. Variables: The variables of the experiment are as follows: Control variable: The type of boiling tube used in the experiment. They must all be the same thickness and must originate from the same company. The same amount of water must be used. The same thermometer. Dependant Variable: The energy changing in every gram. Independent Variable: The fat in the six different types of food. Method: This is the method that I am going to use to carry out my experiment: 1. First of all, you must weigh all six types of food. 2. Set up all the equipment and make sure the safety mats are out so that the bench does not get ruined. 3. Syringe 20ml of water into the test tube that has been put in the retort stand. ...read more.

If I had done the experiment the second time around then maybe the results would have been more accurate and I may have been able to draw a line of best fit on my graphs. Evaluation: If I was to do this experiment again, I would improve the fact that heat is being lost in the environment and to the glass boiling tube. Condensation would produce on the boiling tube making the boiling tube absorb some heat. Boiling tubes were used and they keep heat in and do not let a lot of it out. So if the boiling tube was weighed before it was tested and then weighed straight after the experiment on a certain food. Then it may prove that not all the heat is in the calculation and that some of the heat goes into the environment. Some of the water could be evaporated into the atmosphere, so once again the boiling tube should be measured to find out whether evaporation did occur and if the water weighs less. To prevent the above from happening because, that above method is time consuming and to make sure that accurate results are found then, a bomb calorimeter should be used. this is a strong container used for measuring the energy transfer during chemical reactions. A known mass of a substance is burned in the container and energy is released and then it is measured. 1 Amrit Bagha ...read more.