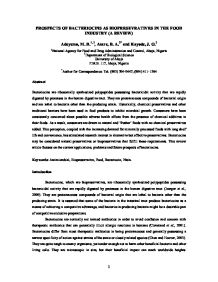 PROSPECTS OF BACTERIOCINS AS BIOPRESEVRATIVES IN THE FOOD INDUSTRY (A REVIEW)

Trout samples were stored at 80C for 17 days and at 30C for 29 days. Both nisin and lactate inhibited the growth of Listeria monocytogenes from 3.3 to 1.8 log10 CFU/g over 16 days of storage at 80C. The level of Listeria monocytogenes remained almost constant (4.7 to 4.9 log10 CFU/g) for 29 days at 30C in the samples injected before smoking and which contained both nisin and sodium lactate. The following applications have been seen to prolong the shelf life of the sea food products: Sakacin P to vacuum-packed salmon; nisin to CO2-packed, cold-smoked salmon; nisin Z to brined shrimp and nisin and lactate to vacuum-packed, cold-smoked rainbow trout (Chen and Hoover, 2003) Hurdle technology to enhance food safety The major functional limitations for the application of bacteriocins in foods are relatively narrow activity spectra and moderate antibacterial effects. Moreover, they are generally nit active against gram-negative bacteria. To overcome these limitations, more and more researchers use the concept of hurdle technology to improve shelf life and enhance food safety (Tables 2-3). It is well documented that gram-negative bacteria become sensitive to bacteriocins if the permeability barrier properties of their outer membrane are impaired. For example, chelating agents, such as EDTA, can bind magnesium ions from the lipopolysaccharide layer and disrupt the outer membrane of gram negative bacteria, thus allowing nisin to gain access to the cytoplasmic membrane. It is well documented that nisin enhances thermal inactivation bacteria, thus reducing the treatment time and resulting in better food qualities (Table 2). The synergistic effect between bacteriocins and other processing technologies on the inactivation of microorganisms has also been frequently reported in the literature (Table 2). There has been continued interest in the food industry in using non-thermal processing technologies, such as high hydrostatic pressure (HP) and pulsed electric field (PEF) in food preservation. It is frequently observed that bacteriocins, in combination with these processing techniques, enhance bacterial inactivation (Table 3). ...read more.

For example, the solubility and stability of nisin Z was improved by replacing Asn-27 or His-31 with lysine; the stability of pediocin PA-1 at 40C and room temperature was improved by replacing Met-31 with alanine, isoleucine or leucine; a pediocin PA-1 chimeric protein mutant displayed approximately 2.8-fold-higher activity against an indictor strain, L. plantarum (Johnsen et al., 2000). Examples such as these indicate solutions to some of the problems related to bacteriocin application; however, getting the regulatory approval for the use of engineered bacteriocins would be very difficult if they are considered as new proteins. Although many bacteriocins have been isolated and characterized, only a few have demonstrated commercial potential in food application. At the time of this writing, nisin is the only purified bacteriocin approved for food use in the U.S. It has been used as a food preservative in more than 50 countries, mainly in cheese, canned vegetables, various pasteurized dairy, liquid egg products, and salad dressings (Guder et al., 2000). The applications of other bacteriocins in food preservation have been studied intensively. The use of pediocin PA-1 for food Biopreservation has been commercially exploited and is covered by several U.S. and European patents (Ennahar et al., 2000; Rodriguez et al., 2002). Fermentate containing pediocin PA-1, AltaTM, is commercially available and used as a food preservative to increase shelf life and inhibit the growth of bacteria, especially Listeria monocytogenes in ready-to-eat meats (Rodriguez et al., 2002). Lacticin 3147, which is active over a wider pH range than nisin, is expected to find application in non-acid foods. Since bacteriocins for use as food preservatives have relatively narrow activity spectra and are generally not active against Gram-negative bacteria, it can be expected that nisin and other bacteriocins will continue to be incorporated and developed into hurdle concept technologies for food preservatives. The simultaneous application of bacteriocins and non-thermal processing technologies usually improve shelf life of foods is attractive since foods produced using these non-thermal technologies usually have better sensory and nutritional qualities compared with products using conventional thermal processing methods. ...read more.