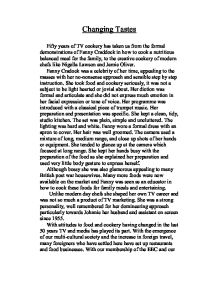 Changing Tastes Fifty years of TV cookery has taken us from the formal demonstrations of Fanny Craddock in how to cook a nutritious balanced meal for the family, to the creative cookery of modern chefs like Nigella Lawson and Jamie Oliver. Fanny Cradock was a celebrity of her time, appealing to the masses with her no-nonsense approach and sensible step by step instruction. She took food and cookery seriously, it was not a subject to be light hearted or jovial about. Her diction was formal and articulate and she did not express much emotion in her facial expression or tone of voice. Her programme was introduced with a classical piece of trumpet music. Her preparation and presentation was specific. She kept a clean, tidy, studio kitchen. The set was plain, simple and uncluttered. The lighting was hard and white. Fanny wore a formal dress with an apron to cover. Her hair was well groomed. The camera used a mixture of long, medium range, and close up shots of her hands or equipment. She tended to glance up at the camera which focused at long range. ...read more.

Her kitchen is modern clean and bright with the traditional touch of her pantry. It is well designed and equipped. She is portrayed by the camera as soft, sensual and fun-loving. She wears modern stylish expensive clothes. She looks colourful and fun-loving. The camera uses a mixture of Long, medium, close up, extreme close-up and tracking shots. The cameras continually switch between shots. An example of the use of a tracking shot is when she walks from her larder into the kitchen and the camera follows her at close range. The extreme close up is used when she is shown separating an egg white from the yolk. She has an intimate relationship with the camera, with many close-up shots of her hands at work and most importantly her face when she gazes into it to speak directly with her audience. The lighting used is soft and gentle mixed with natural light in the background. This creates a relaxed atmosphere and makes the food more appealing. The introduction of colour to TV in 1970 has greatly enhanced the appeal of food on the screen. ...read more.

He likes to give the Impression that anyone can do it. He cooks in his own kitchen which like Nigella is well designed and equipped, but unlike her it is disorganised and messy. There are pans and bowls lying about. He uses extra large bowls and pans to show off his masculinity. The camera shots used are a mixture of long, medium, close up and tracking shots. When Jamie is talking to his audience the camera is using long range shots to capture his body gestures. He is extremely gestured when he is explaining his recipes. The lighting is a mixture of studio and natural daylight creating a bright and lively atmosphere. Jamie has an empathy with young people like himself particularly those who are disadvantaged. He has actively set out to set up projects to help young people and succeeded which has won him public praise and respect. There is no doubt that TV cooks have played a huge role in promoting good food and cooking at home and in the restaurant market since the 50's. Food cookery is now recognised as a creative art and a respected industry, where the individual style and personality of the chef matters. By William Roberts ...read more.