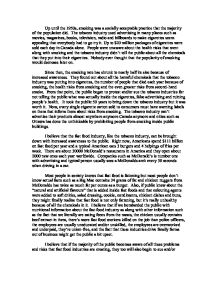 Up until the 1950s, smoking was a socially acceptable practice that the majority of the population did.

Up until the 1950s, smoking was a socially acceptable practice that the majority of the population did. The tobacco industry used advertising in many places such as movies, magazines, books, television, radio and billboards to make cigarettes seem appealing that everybody had to go try it. Up to $20 million packages of cigarettes were sold each day in Canada alone. People were unaware about the health risks that went along with smoking and the tobacco industry didn't tell the public about all the chemicals that they put into their cigarettes. Nobody ever thought that the popularity of smoking would decrease later on. Since then, the smoking rate has shrunk to nearly half its size because of increased awareness. ...read more.

I believe that the fast food industry, like the tobacco industry, can be brought down with increased awareness to the public. Right now, Americans spend $111 billion on fast food per year and a typical American eats 3 burgers and 4 helpings of fries per week. There are about 30000 McDonald's restaurants in America and they open about 2000 new ones each year worldwide. Companies such as McDonald's is number one with advertising and typical person usually sees a McDonalds arch every 30 seconds when driving in a car. Most people in society knows that fast food is fattening but most people don't know actual facts such as a Big Mac contains 34 grams of fat and chicken nuggets from McDonalds has twice as much fat per ounce as a burger. ...read more.

I believe that if the majority of the public becomes aware of all these problems and risks that fast food industries are creating, they too will also begin to sue and/or protest like what happened to the tobacco industry and hopefully new laws will be put into place. Some day in the future, there will warning signs on the fast food containers warning people about the risks of consuming those products and places like McDonald's won't be allowed to advertise their products in Canada. There might even be a bylaw made so that people won't be allowed to eat fast food inside public buildings. Nobody knows what will happen in the future but I do know that we can bring down the fast food industry the same way as we brought down the tobacco industry. It will just take time. The Fast Food Industry Julia Cao December 11, 2002 ...read more.