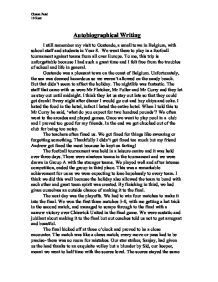 Autobiographical Writing I still remember my visit to Oostende, a small town in Belgium, with school staff and students in Year 8. We went there to play in a football tournament against teams from all over Europe. To me, this trip is unforgettable because I had such a great time and I felt free from the troubles of school and life in general. Oostende was a pleasant town on the coast of Belgium. Unfortunately, the sea was deemed hazardous so we weren't allowed on the sandy beach. But that didn't seem to affect the holiday. The nightlife was fantastic. The staff that came with us were Mr Fletcher, Mr Fuller and Mr Curry and they let us stay out until midnight. I think they let us stay out late so that they could get drunk! Every night after dinner I would go out and buy chips and coke. I hated the food in the hotel, infact I hated the entire hotel. When I told this to Mr Curry he said, 'what do you expect for two hundred pounds'? We often went to the arcades and played games. ...read more.

We were ecstatic and jubilant about making it to the final but out coaches told us not to get arrogant and boastful. The final kicked off at three o'clock and proved to be a close encounter. The match was like a chess match; every move or pass had to be precise- there was no room for mistakes. Our star striker, Sanjay, had given us the lead thanks to an exquisite volley but a blunder by Sid, our keeper, meant we went to half time with the scores level. The scores stayed the same until the ninetieth minute. I collected a pass from Sanjay and he made a run towards the goal. I played a through ball into his path. The defenders didn't move, as they were appealing for offside but the decision wasn't given. He was onside. My heart was in my mouth. He was on his own with only the goalkeeper to beat. He deceived the keeper by pretending to shoot. All he had to do was to go around him. He did but just as he was about to shoot the keeper brought him down. ...read more.

The ball spent an eternity in the air. 'Yeesssss' the crowd shouted. The ball went in. The keeper dived the wrong way. I had won the tournament for the team. In a moment of sheer jubilation, I took off my shirt and ran around the pitch. As I reel back the memories in my head I still remember how I felt that Sunday afternoon. It was one of my proudest ever moments but there was an another moment that I was equally as proud of. On the final night of the holiday, the teachers called us to the hotel for a meeting. They told us they had really enjoyed this holiday and were really impressed by the way we had played. Furthermore they said that they used the money they collected for fines to buy trophies for us. There were four trophies to acquire, and I won the player's player award. This was an immense honour for me as I was voted for by my fellow counterparts. I had a really valuable experience on this trip. I got to know people that I didn't really know well and became more responsible for myself. I became more independent and gained maturity as the holiday went on. ?? ?? ?? ?? Chetan Patel 10 Kent ...read more.