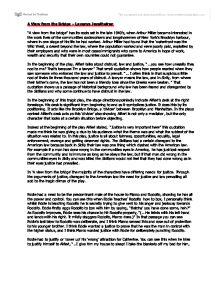 A View from the Bridge - Lavanya Jeyatheiran "A view from the bridge" has its roots set in the late 1940's, when Arthur Miller became interested in the work lives of the communities dockworkers and longshoremen of New York's Brooklyn harbour, where in one stage of his life he had worked. Arthur Miller had found that the 'waterfront was the Wild West, a desert beyond the law, where the population worked and were poorly paid, exploited by their employers and who were in most cases immigrants who came to America in hope of work, wealth and security that their own countries could not guarantee. In the beginning of the play, Alfieri talks about distrust, law and justice, "...you see how uneasily they nod to me? That's because I'm a lawyer" That small quotation shows how people reacted when they saw someone who enforced the law and justice to prevail. "... I often think in that suspicious little nod of theirs lie three thousand years of distrust. A lawyer means the law, and in Sicily, from where their father's came, the law has not been a friendly idea since the Greeks were beaten." That quotation shows us a passage of historical background why law has been feared and disregarded by the Sicilians and why some continue to have distrust in the law. ...read more.

What I feel like doin' in the bed and what I don't feel like doin'" showing he has not shown a sexual interest towards his wife for a long time and doesn't intend to any time soon. Finally Eddie has a need for justice and respect from Rodolfo as he is the 'stand-in' parent to Catherine. You can see this when e is warning Catherine of Rodolfo, "Katie...if you wasn't an orphan, wouldn't he ask your father's permission before he run around with you like this?" This passage indicates Eddie clearly doesn't believe Rodolfo has any respect for him and that in a way he thinks of himself as Catherine's father. In this prospective, Eddie has an urge of justice with Rodolfo and this urge collides with Rodolfo's need for justice, as previously mentioned. Beatrice want fairness in her marriage, she wants Eddie to show her the compassionate feelings he once showed her when they first fell in love. You can see this when she says, "When am I gonna' be a wife again, Eddie?" she doesn't just mean through the sexual side of their relationship but she means the love and compassion that they both shared a long time ago. Beatrice wants justice with her relationship with her husband who continues to neglect her even after confrontation, this conflicts with Eddies need for justice because his needs for justice are prioritised else where. ...read more.

There is no other law" when Alfieri says this line he's not implying that the law is correct but the law is like a rule book, and if the rules are obeyed there will be no problems, this doesn't always mean justice prevails. Justice is about fairness, opportunities, equality, legal enforcement, revenge and getting deserved rights. Justice is a key part of the drama because every character has a strong need for it with their situation. At the beginning and end of the play, Alfieri mentioned a very touching statement which showed me that he developed a love for Eddie because he understood him but could not help him, in any possible way. The only person, who could have helped Eddie, was simply Eddie, but sadly he never realised that until it was too late. The statement Alfieri said which brought this realisation to me was, "Now we settle for half and I like it better" - the whole trauma could have been avoided if each character compromised with each other. Marco and Rodolfo had a disregard for the American law and vice versa for Eddie's disregard for the Sicilian law. Justice is something every individual has an opinion on, but in some cases the justice prevails keeping some satisfied. Yet in other cases justice doesn't always proceed keeping some hurt or furious, or even both. Alfieri knew how important justice was at the start when he pointedly stated, "justice is very important here." ...read more.