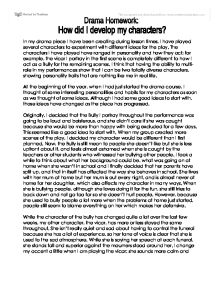 How I Developed My Characters

In my drama piece I have been creating during lesson times, I have played several characters to experiment with different ideas for the play. The characters I have played have ranged in personality and how they act; for example, the vicar I portray in the first scene is completely different to how I act as a Bully for the remaining scenes. I think that having the ability to multi-role in my performances show that I can be two totally diverse characters, showing personality traits that are nothing like me in real life. At the beginning of the year, when I had just started the drama course, I thought of some interesting personalities and habits for my characters as soon as we thought of some ideas. ...read more.

When my group created more scenes of the play, I decided my character would be different than I first planned. Now, the Bully is still mean to people she doesn't like but she is less upfront about it, and feels almost ashamed when she is caught by the teachers or other students who witnessed her bullying other people. I took a while to think about what her background could be, what was going on at home when she wasn't in school and I finally decided that her parents have split up, and that in itself has affected the way she behaves in school. She lives with her mum at home but her mum is out every night, and is almost never at home for her daughter, which also affects my character in many ways. ...read more.

She isn't really quiet and sad about having to control the funeral because she has a lot of experience, so her tone of voice is clear that she is used to the sad atmosphere. While she is saying her speech at each funeral, she stands tall and superior against the mourners stood around her. I change my accent a little when I am playing the vicar; she sounds more calm and caring with a softer accent than mine to show that she cares about and has empathy for the family around her who have just lost a loved one. I find it easy to change my character in each scene by changing my attitude and voice; I think it is just something that comes naturally to me. ...read more.