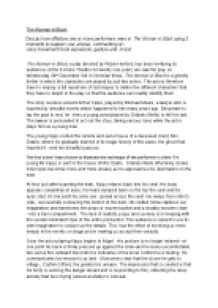 In The Woman in Black discuss how effective one or more performers were using 2 moments to support your answer. Comment on voice, movement facial expression, gesture and mood

﻿The Woman in Black Discuss how effective one or more performers were in The Woman in Black using 2 moments to support your answer, commenting on voice movement facial expression, gesture and mood The Woman in Black, a play directed by Robin Herford, has been terrifying its audiences at the Fortune Theatre for twenty one years; we saw the play on Wednesday 29th December Set in Victorian times, The Woman in Black is a ghostly thriller in which the characters are played by just two actors. The actors therefore have to employ a full repertoire of techniques to define the different characters that they have to depict in the play so that the audience can readily identify them . The story revolves around Arthur Kipps ,played by Michael Mears, a lawyer who is haunted by dreadful events which happened to him many years ago. Desperate to lay the past to rest, he hires a young actor(played by Orlando Wells) to tell his tale. The lawyer is persuaded to act out the story, taking various roles while the actor plays him as a young man. ...read more.

Kipps learns that the man , called Simon Daily, is also travelling to Crythin Gifford. Relived to be distracted from his grim work ahead, Kipps becomes more at ease as the light conversation progresses and leans forward towards Samuel Daily , conveying his genuine interest in their conversation and his appreciation for the friendly human contact. Kipps wants to know more about the village he is travelling to and find out more about Mrs Drablow. Simon Daily speaks openly about Crythin, explaining that there are rarely any visitors; he talks quickly and fluently, maintaining eye contact with Mr Kipps. However, the easy social discourse comes to an abrupt halt when Kipps enquires about the recent demise of his client, Mrs Drablow. His enquiry is greeted by an immediate silence. Samuel Daily clams up, sits up straight in his chair, withdraws eye contact and instead stares pointedly out of the window. He thus conveys very clearly that the subject bothers him and he is not happy to divulge any of the tales that surround her family. Because this behaviour is such a contrast to the easy, friendly manner he had a few moments before, we wonder what could possibly have provoked such a strong reaction. ...read more.

his body .I think Michael Meer?s? portrayal of Mr Jerome ,in the scene described above, was very effective as he conveyed a lot about the character in a reasonably short scene. He also seemed aware of every part of his body and was therefore able to show complete fear and anxiety. He depicted very successfully a man who had lost his equilibrium, with jerky movements and speech. He showed an inability to regain composure and even planted doubts in the minds of the audience about his sanity. The actors interacted well with the two mirroring each other's unease. The stagecraft was good in that the actors both commanded our attention- one was not dominating the scene more than the other. The two scenes I have described from The Woman in Black show that the dramatic power of the play depends greatly on the skill of the two actors who use all their non verbal skills to develop the tension rather than merely relying on what they are saying. By employing very convincing mime and close observation of how people behave under stress or when they are very frightened, they convince us and involve us in the dark world they create on stage. ...read more.