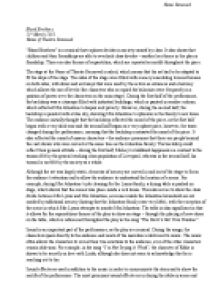 ﻿Name Removed Blood Brothers 21st March 2011 Name of Theatre Removed ?Blood Brothers? is a musical that explores divides in society caused by class. It also shows that children and their friendships are able to overlook class divides ? another key theme in the play is friendship. There are also themes of superstition, which are repeated as motifs throughout the piece. The stage at the Name of Theatre Removed is raked, which means that the set had to be adapted to fit the slope of the stage. The sides of the stage were filled with scenery resembling terraced houses on both sides, with doors and archways that were used by the actors as entrances and a balcony which allows the use of levels (the characters who occupied the balconies were frequently in a position of power over the characters on the main stage). During the first half of the performance, the backdrop was a cityscape filled with industrial buildings, which is painted in sombre colours, which reflected Mrs Johnstone?s despair and poverty. However, during the second half, the backdrop is painted with a blue sky, showing Mrs Johnstone?s optimism in the family?s new home. ...read more.

has compared to him, which is shown through the text of the monologue. Throughout the play, the same actors played the characters at various stages of their life ? from the age of seven to young adulthood (in the cases of Mickey, Linda and Eddie). This is effective because it allows for a more consistent character than if a character was played by a variety of actors and the use of adult actors allows the characters to be more realistic and meaningful to the audience, as younger actors generally have less experience. The use of adult actors playing very young children allows for added comedic value ? when the actor playing Mickey appeared on stage for the first time in the performance, the audience laughed, as he was clearly not a child, but an actor playing a comically exaggerated child character. This added to the upbeat humour of the first half of the play, while allowing the second half of the play to remain gritty and dark, as the actors are capable of playing a range of tones. There is an ensemble in the cast, which serves as both a chorus and minor characters ? for example, the actor playing the bus conductor was also in the ensemble for much of the performance. ...read more.

Her religion may also be shown through the number of children that she has ? some strict religions oppose contraception or encourage believers to have many children in order to please God. The actress effectively shows her desperation at having twins through her sudden quietness after learning that she is having more than one other baby, as well as a stoop similar to that of Mickey in later scenes. However, the actress portrays her as happy despite her circumstances and often laughed affectionately when her character?s offspring were in trouble. She is, however, portrayed as cold when speaking to Eddie, which shows that she regrets giving him away, even though he has a better life than she could provide. Mrs Johnstone?s life was never in her control and was largely influenced by other characters (the narrator often appears to force Mrs Johnstone through her life). For example, it is not her choice to give Eddie up, but Mrs Lyons, who is educated and manipulative forced her into it through playing on her conscience. This reflects the theme of class as power, as well as showing how powerless women were at the time. Overall, I enjoyed the play, especially the casting choices. ...read more.