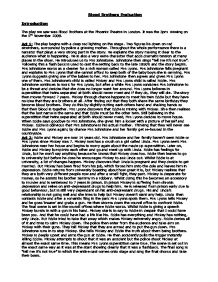 The play we saw was Blood Brothers at the Phoenix Theatre in London. It was the 3pm viewing on the 5th November 2009.

Blood Brothers Evaluation Introduction The play we saw was Blood Brothers at the Phoenix Theatre in London. It was the 3pm viewing on the 5th November 2009. Act 1: The play begins with a deep red lighting on the stage. Two figures lie down on red stretchers, surrounded by police a grieving mother. Throughout the whole performance there is a narrator that plays a very strong part in the story. He explains the story making it clear to the audience what is happening. He is also a very eerie character that adds dramatic tension at many places in the show. He introduces us to Mrs Johnstone. Johnstone then sings "tell me it's not true". Following this a flash back is used to cast the setting back to the late 1950's and the story begins. Mrs Johnstone works as a cleaner for a rich woman called Mrs Lyons. Mrs Johnstone falls pregnant and explains to Mrs Lyons that she cannot afford to keep both of the baby boys she is carrying. Mrs Lyons suggests giving one of the babies to her. Mrs Johnstone then agrees and gives Mrs Lyons one of them. Mrs Johnstone's child is called Mickey and Mrs Lyons child is called Eddie. Mrs Johnstone continues to work for Mrs Lyons, but after a while Mrs Lyons considers Mrs Johnstone to be a threat and decides that she does no longer want her around. Mrs Lyons believes in superstition that twins separated at birth should never meet and if they do, they will die. The story then moves forward 7 years. Mickey through chance happens to meet his twin Eddie but they have no idea that they are brothers at all. After finding out that they both share the same birthday they become blood brothers. They do this by slightly cutting each others hand and shaking hands so that their blood is together. ...read more.

There was also lighting above the actors and spotlights that were placed on characters at important parts of the performance to mark the moment. At the happier moments of the play such as the beginning of the flash back and when children were playing, the lights were very bright symbolising enjoyment and fun. The spotlight was shone on Mickey and Eddie when they became blood brothers, this was to mark a key moment in the play and it symbolised the turning point of the story. The spotlight was also used to mark the moment when Mrs Lyons took one of the babies from Mrs Johnstone, this also enhanced the significance of the twin's life about to dramatically change. In act 2 I considered the play to be a lot more serious and emotional due to having Mickey and Eddie being with each other a lot. The narrator emphasised this and the lighting became much darker and red to fit with the build of dramatic tension, also symbolising danger was yet to come in Mickey and Eddies Lives. In the final scene where Mickey and Eddie were shot, the lights were very dark proving it to be a very eerie and upsetting scene. Costume Design Mickey's clothing was creased and torn with holes in them. They were far too big for him and they were dirty, this could show that the Johnstone's were poor and might not have been able to afford nice clothing. Mrs Johnstone extended this thought as she wore tatty robes that looked very worn and dirty. Whereas Eddie wore smart, pressed clothes that were clean. His shirt was tucked in and he had polished black shoes. Mrs Lyons wore very smart dresses and blouses that were very elegant with a pearl necklace. This showed strongly as class division between the working class and the upper class. This also showed contrast between the two families and a difference in economy because I believed that the Johnstone's were too poor to buy clothes so they relied on "hand me downs". ...read more.

a few moments to build the tension before the twins were eventually killed and then the atmosphere became very quiet and indistinctive and the narrator repeated the opening song, this was very effective. Improvements The only improvement I would have made is that some of the unnamed characters multi-role played and it was not completely clear when they changed roles, so maybe they could have made different costumes to make them bespoke to that character so it would have made it clear who is who. Conclusion I think that the play was very good and felt very real. Some parts were very tragic and some very happy which was clear to the audience through use of lighting, music and explorative strategies. Much of the play was clearly about two main themes, superstition and class divisions. There was much debate at who was to blame for the tragedy. Another big thing that people put the blame on was class division that shaped both of the boys lives, they both lived almost in opposite houses, areas and lived oppsite ways of life. What Mickey had, freedom, Linda and a close relationship with his mother this is what Eddie wanted. And what Eddie had, riches and prosperity this is what Mickey wanted. I think it was good how they showed that when Mickey and Eddie were younger, they were oblivious to their different classes, but as they grew older and the story progressed they realized the class divide between them. However I don't think that superstition was the reason for the two brothers dying. I believe that Mickey realised how important Linda was to his life because he had nothing apart from her, whereas Eddie seemed to have everything. I think even if these two boys weren't brothers they would have died in the same way due to Mickey not taking his anti-depressant drugs. Mickey did not want Linda to be taken away from him which made him angry and confused, which is why he shot Eddie. ...read more.