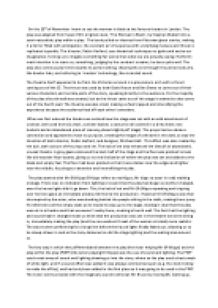 ﻿On the 29th of November I went to see the woman in black at the fortune theatre in London. The play was adapted from Susan Hill?s original novel, ?The Woman in Black?, by Stephan Mallart into a semi-naturalistic play within a play. The book pulled on themes from Victorian ghost stories, making it a horror filled with anticipation, the constant air of suspense with underlying menace and threat is replicated superbly. The director, Robin Herford, uses theatrical techniques to ignite and excite our imagination, forcing us to imagine something far worse than what we are actually seeing. Herford?s main intention is to scare us, something, judging by the constant screams, he does quite well. The play also continuously hints towards its period setting, showing the era through the period costume, like bowler hats, and referring to ?modern? technology, like recorded sound. The theatre itself appeared to be from the Victorian era and is a proscenium arch with a thrust coming out of the CS. The thrust was used by both David Acton and Ben Deery to come out of their various characters and narrate parts of the story, speaking directly to the audience. For the majority of the play a fourth wall was created, but as the thrust came out of the stage it seemed to also come out of the fourth wall. The theatre was also small, making us feel trapped and intensifying the experience because the audience feed off each other?s emotions. When we first entered the theatre we noticed how the stage was set with an odd assortment of unclean, well used items ...read more.

However the performances during the PWP were fantastic. David Acton convincingly became a variety of different characters, convincingly changing his accent for each character depending on their class and area they lived (e.g. country accent) as well as giving them certain characteristic, for instance Tomes?s sniff. The tone and pace of his voice would also change, for instance Keckwick had a slow, deep, emotionless voice with a thick country accent. He also had an emotionless facial expression and was hunched over, creating a secrecy about the character that made us very wary of him. His transformation between the different characters was also aided with simple costume changes that dictated the class and background of the character, as well as suiting the situation they were currently in. For example to become Keckwick he donned a dark green coat, an old scarf and brown hat. All the items looked well used, inexpensive and were darkly coloured, suitably making the character looked dressed for a cold night or day, showing he is working-class as well as indicating to the audience that the characters were outside. Where as to be Mr Jerome at the funeral he dressed smartly in a black suit and top hat (middle or upper class), again this suited the character and the situation. The majority of the costume changes were done on stage with the open use of a clothes rail. This is a Brechtian technique that asks the audience to suspend their disbelief and momentarily breaks the fourth wall. ...read more.

The Woman in Black makes several appearances throughout the play, most of which are sudden and unexpected, shocking us briefly. The only time I felt genuinely afraid was when the supernatural activity had a build up. The sound of heartbeats and the pony and trap were often used alongside darkness and night-time to do this, building up a foreboding, haunting atmosphere. This was used so much that we learnt to associate it with a terrifying outcome, and by the end of the play seeing/hearing either would immediately fill us with dread, creating suspense and tension. The sound/darkness is then intensified to intensify our reaction and the pace of the sound effects speeds up, scaring us further, until reaching a shocking climax of either the appearance of the Woman in Black or a blood curdling scream that is so loud we can feel it. Short shocks often involve the gauze, it constantly switches from opaque to transparent, revealing something to shock us. It?s also used to show the location of a scene by projecting gobo?s onto it (e.g. outside of house). It also creates another room that can be easily accessed by backstage crew during the play, the sudden change of this room can scare us, like when the nursery is ruined, as in the play the room is almost inaccessible, so it suggests supernatural activity. It?s these hidden features of the set that help make the play so scary. The theatre has hidden wings and steps at the front of the stage to make it seem like the woman in black can appear at will. Overall it is a very scary play. ...read more.