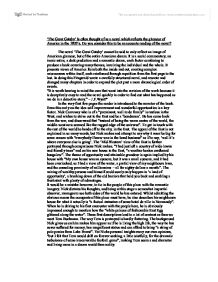 &amp;#145;The Great Gatsby&amp;#146; Is often thought of as a novel which reflects the glamour of America in the 1920&amp;#146;s. Do you consider this to be an accurate reading of the novel?

'The Great Gatsby' Is often thought of as a novel which reflects the glamour of America in the 1920's. Do you consider this to be an accurate reading of the novel? The novel 'The Great Gatsby' cannot be said to only reflect an image of American glamour, but of the entire American dream. It is a social commentary, an ironic satire, a dark prediction and a romantic drama, each factor combining to produce a book covering many themes, involving the individual and the whole. It presents views of America from both the inside and out, creating complex microcosms within itself, each reinforced through repetition from the first page to the last. In doing this Fitzgerald wrote a carefully structured novel, and rewrote and changed many chapters in order to expand the plot past a mere chronological order of events. "It is worth bearing in mind the care that went into the revision of the work because it is deceptively easy to read the novel quickly in order to find out what has happened as we do in a detective story." - J.F.Wyatt* In the very first few pages the reader is introduced to the narrator of the book. Even this early on the idea self-improvement and wonderful opportunities is a key factor. Nick Carraway who is of a "prominent, well to do family" is restless in the West, and wishes to strive out to the East and be a 'bondsman'. He has come back from the war, and discovered that "instead of being the warm centre of the world, the middle-west now seemed like the ragged edge of the universe". ...read more.

That Nick has seen the 'inside' of these people is fundamental, as they can be taken as the epitome of glamour in the book, in which case it is not necessarily something to be desired. In terms of 'The American Dream', I think that Gatsby had it. This is not revealed to us at the beginning of the novel, instead Gatsby is a mysterious figure, someone you caught glimpses of but were never fully revealed. "I saw that I was not alone, a figure had emerged from the shadow of my neighbours mansion...... he stretched out his arms towards the dark water in a curious way, and, as far as I was away from him, I could have sworn he was trembling.......when I looked once more again for Gatsby he had vanished, and I was alone again in the unquiet darkness" The revelations about Gatsby occur at intervals in the book, breaking up Nick's chronological narrative and providing snippets of information, keeping us interested. J.F.Wyatt* says "Nick is taken to New York by the great man himself and on the journey he reveals tantalising fragments of his past." The next thing we are presented with to do with Gatsby is the speculation of various people at his parties. "Somebody told me they thought he killed a man once" "It's more that he was a German spy during the war" These comments have to be taken in the context of which they are said though. Nick himself whilst at the time half believing these stories about this mysterious man also analyses the situation, his thoughts being:- "It was testimony to the romantic speculation he inspired that there were whispers about him from those who found little that it was necessary to whisper about in this world.". ...read more.

That is very interesting as he is not, due to his involvement in crime, adultery and using of Nick. This means that at a first glance, Gatsby is a true example of the American dream. He is very wealthy and has made it all himself, is generous and flash. Gatsby's willingness to protect Daisy from anything, is also his downfall. His death is due to his placing of his trust in an imperfect character. In Gatsby's mind, his sheltering of Daisy from responsibility of Myrtle's death can only be a good thing as he is helping the woman he loves. In reality, the world does not work like that and he is only setting himself up to reap the repercussions and tempt Daisy to revert to her secure husband and feel safe without him. "He put his hands in his coat pockets and turned back eagerly to his scrutiny of the house, as though my presence marred the sacredness of the vigil. So I walked away and left him standing there in the moonlight - watching over nothing." If the glamour is to be Gatsby and his parties, then this novel could be thought to incorporate a social commentary on 'high-society', and 'glamour' and wealth. If Tom and Daisy provide the glamour, then it is a deeply pessimistic book, as they are shallow characters, whose whole attitude is summed up by their running away in the end. Therefore; This novel is not a romantic reflection into the glamour of any era. It is a story of the perversity of the world in that a dream however noble, can be warped and ruined by both the holder of the dream and those careless and responsible around them. The American Dream does exist, but if you are not careful, at what cost. ...read more.