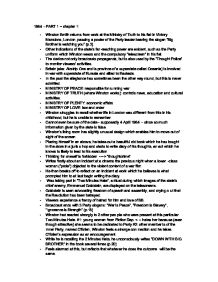 1984 - PART 1 ~ chapter 1: - Winston Smith returns from work at the Ministry of Truth to his flat in Victory Mansions, London, passing a poster of the Party leader bearing the slogan "Big Brother is watching you" (p.3). - Other indications of the state's far-reaching power are evident, such as the Party uniform which Winston wears and the compulsory "telescreen" in his flat. - The device not only broadcasts propaganda, but is also used by the "Thought Police" to monitor viewers' activities. - Britain (aka: Airstrip One and is province of a superstate called Oceania) is involved in war with superstate of Eurasia and allied to Eastasia. - In the past the allegiance has sometimes been the other way round, but this is never admitted. - MINISTRY OF PEACE: responsible for running war - MINISTRY OF TRUTH (where Winston works): controls news, education and cultural activities. - MINISTRY OF PLENTY: economic affairs - MINISTRY OF LOVE: law and order - Winston struggles to recall whether life in London was different from this in his childhood, but he is unable to remember. ...read more.

- His sleep is broken by morning alarm whistle from telescreen, followed by a programme of compulsory physical exercises. - While exercising, he struggles to recall details of his childhood, particularly his experience of an air raid and reflects upon the way that since then things have been distorted. - Oceania is supposed to have been at war with Eurasia and allied to Eastasia for a long period, but Winston knows that 4 years ago Eastasia was the enemy and Eurasia the ally. - Similarly BB's leadership of the Party has been backdated by decades and the Party falsely credits itself with the invention of the aeroplane. - Winston's thoughts are interrupted by the instructor on the telescreen, who singles him out so aggressively for slacking for once that he does succeed in touching his toes. PART 1 - chapter 4 - Winston's job at the co-called Ministry of Truth is to rewrite past issues of the Times in order to bring them into line with the most recent version of history approved by Party. - All records, from novels to cartoons, have to be falsified this way. ...read more.

- Thinking of him as his reader, he concludes the diary entry by stating: "Freedom is the freedom to say that 2+2 makes 4. If that is granted, all else follows" (p.84). PART 1 - chapter 8 - Winston truants from an evening at the Community Centre and wanders instead through the slums of north London, observing and reflecting upon the proles. - After escaping death from a rocket bomb, he enters a pub and strikes up a conversation with an elderly man, hoping that his informant will be able to give him a first-hand account of the past. - However the information he receives is so fragmentary and personal that it is useless. - He leaves the pub and wanders the streets until he finds himself at the junkshop where he bought the diary. - Here he buys a beautiful coral paperweight and talks to the shop owner, Carrington, about various relics of the past, including the nursery rhyme "Oranges and lemons". - On his way home he is terrified to find himself passing the girl from the Fiction Dep. - He now believes more than ever that she is spying on him and will soon denounce him to the authorities. -END OF PART 1- ...read more.