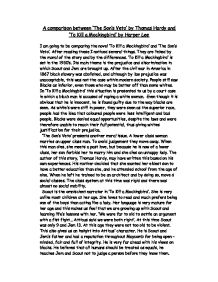 A comparison between 'The Son's Veto' by Thomas Hardy and 'To Kill a Mockingbird' by Harper Lee I am going to be comparing the novel 'To Kill a Mockingbird' and 'The Son's Veto'. After reading these I noticed several things. They are linked by the moral of the story and by the differences. 'To Kill a Mockingbird' is set in the 1930's. Its main theme is the prejudice and discrimination in which Scout and Jem are brought up. After the civil war in America in 1867 black slavery was abolished, and although by law prejudice was unacceptable, this was not the case within modern society. People still saw Blacks as inferior, even those who may be better off than some whites. In 'To Kill a Mockingbird' this situation is presented to us by a court case in which a black man is accused of raping a white woman. Even though it is obvious that he is innocent, he is found guilty due to the way blacks are seen. As white's were still in power, they were seen as the superior race, people had the idea that coloured people were less intelligent and bad people. Blacks were denied equal opportunities, despite the laws and were therefore unable to reach their full potential, thus giving whites justification for their prejudice. ...read more.

It is written in third person narrative, and Sophy is the main character. The message of this story is not as clear, although we see how women are treated as belongings who have no right to make decisions and have no feelings. 'It will degrade me in the eyes of all the gentlemen in England,' her son, Randolph, replied when Sophy asked his permission to marry Sam. We are given Randolph in this story to show the prejudiced views on the lower class. It is similar to 'To Kill a Mockingbird' in the way that prejudice was an accepted way of life and it is irrelevant how happy a person is, being etiquette is paramount in society. Although this message is not based on Thomas Hardy, the fact that he managed to move social classes is not dissimilar to Sophy. The language in 'To Kill a Mockingbird' is a mixture of Standard English, American and Childish dialect. We can speculate that the Standard English is meant to be believed by the reader, as these present the facts of Maycomb. The narration is always Standard English and in first person narrative. Scout uses very adult terminology; this could be because Harper Lee may be looking back on similar events in her life, and making sense of the thoughts she ad at the time. ...read more.

They don't do anything for the community and send their children to the first day of school each year but nothing more. But because they are white they still have a higher status than the Robinson's and for this reason win the trial. Even though it is obvious he is innocent and it is suspected that Mr Ewell may have committed the crime himself because he disliked the relationship between Tom and his daughter. This emphasises how prejudiced the community is. I think that Harper Lee wrote this book not only to show the reader the past and how society worked, but also to teach us lessons for modern life. Through the book we discover the hurt and unfairness of inequality, and therefore think more carefully about out future actions. Gossip also still exists today, probably more than ever with chat shows, magazines and tabloid newspapers joining in. I think it is a huge lesson to us all. In conclusion I think that both books are not just for enjoyment, but also to make us think more carefully about others and our actions. I have learned that before I judge anyone I should get to know him or her. 'To Kill a Mockingbird' was easier to read, but because 'The Son's Veto' is written in an older language it seems of a higher standard. The message was also harder to understand in 'The Son's Veto'. ...read more.