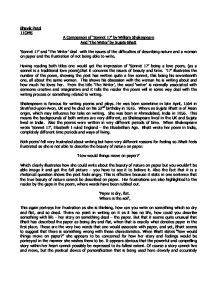 Bhavik Patel 11OMS A Comparison of 'Sonnet 17' by William Shakespeare And 'The Writer' by Sujata Bhatt 'Sonnet 17' and 'The Writer' deal with the issues of the difficulties of describing nature and a woman on paper and the frustration of not being able to write. Having reading both titles one would get the impression of 'Sonnet 17' being a love poem, (as a sonnet is a traditional love poem),that it concerns the issues of beauty and time. '17' illustrates the number of the poem, showing the poet has written quite a few sonnet, this being his seventeenth one, all about the same women. This shows his obsession with the woman he is writing about and how much he loves her. From the title 'The Writer', the word 'writer' is normally associated with someone creative and imaginative and it tells the reader the poem will in some way deal with the writing process or something related to writing. Shakespeare is famous for writing poems and plays. He was born sometime in late April, 1564 in Stratford-upon-Avon, UK and he died on his 52nd birthday in 1616. Where as Sujata Bhatt is of Asian origin, which may influence her take on writing. ...read more.

she appears to be concerned for how her story and feelings would be portrayed in the manner she wishes them to be. It appears obvious that the powerful and compelling story within her heart cannot possibly be expressed to its fullest extent. Of course a story cannot live and move, but the poetical device of personification that is being used here cleverly and accurately depicts her message that the story cannot be animated and brought to life except for "in your heart". The effect is to make the reader imagine the story suddenly springing to life and the distinct impression is given that the reader would be made to feel more in touch with the story or message that Bhatt is desperately trying to convey. The irony of 'The Writer' is that for someone whose profession it is to write, it seems odd that she finds it so hard to express her feelings on paper. "the best story ..... Is the one you can't write" It seems Bhatt would prefer to keep her emotions hidden in her heart and that is where the story is best told; perhaps indicating that she would rather tell the story to someone who is very close to her. ...read more.

The poets' both use punctuation in a very specific way to highlight their opinions. Bhatt has used very little punctuation; she has used embjambment. This is effective because it means all the lines flow without a pause, which means it is supposed to be read quickly - things are normally read quickly when angry which is relevant as we know Bhatt feels very strongly about destroying nature. In contrast Shakespeare also hasn't used much punctuation just like Bhatt for the same reason - so the words run through the lines, projecting anger. In conclusion, my opinions on both poems are that 'Sonnet 17' was quite hard to understand at the beginning but after I had circled key words and written associations with them and analysed it, I began to understand what the poet was trying to say. Over all I think 'Sonnet 17' is well written but it is quite hard to understand. 'The Writer' was not as hard a poem to understand but it was still hard. Again I circled key words and analysed which helped with understanding it. Overall I thought the poem was well thought out and interesting. ?? ?? ?? ?? ...read more.