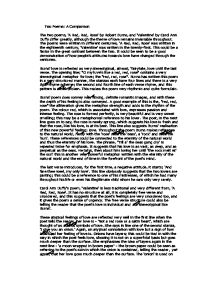 A Comparison of the two poems, 'A Red, Red, Rose' by Robert Burns, and 'Valentine' by Carol Ann Duffy

Two Poems: A Comparison The two poems, 'A Red, Red, Rose' by Robert Burns, and 'Valentine' by Carol Ann Duffy differ greatly, although the theme of love remains invariable throughout. The poems were written in different centuries, 'A Red, Red, Rose' was written in the eighteenth century, 'Valentine' was written in the twenty-first. This could be a factor in the great contrast between the two. It could be seen to be a good demonstration of how people's attitudes towards love have changed through the centuries. Burns' love is reflected as very stereotypical, almost, 'fairytale, love until the last verse. The opening line; "O my luve's like a red, red, rose" contains a very stereotypical metaphor for love; the "red, red, rose". Burns has written this poem in a very structured manner, the stanzas each have four lines and there is a very tight rhyme scheme; the second and fourth line of each verse rhyme, and this pattern is never broken. This makes the poem very rhythmic and quite formulaic. Burns' poem does convey very strong, definite romantic images, and with these the depth of his feeling is also conveyed. A good example of this is the, "red, red, rose" the alliteration gives the metaphor strength and adds to the rhythm of the poem. ...read more.

These atypical feelings of love are reflected very well in the first line when the poet tells the reader, her love is - 'Not a red rose or a satin heart', which are thought of as normal symbols of love. She says in line one of the second stanza, 'I give you an onion.' Again, an atypical connotation with love but a sign of how individual her feeling of love is. Onions have layers; this could be tied in with the way in which the poet feels love, showing it is not on a superficial basis but goes much deeper than the surface. She emphasises the idea of layers again in the next line - 'a moon wrapped in brown paper' - the brown paper could be seen as referring to the poet's skin in which the onion is contained, telling the reader, yet again, that her love goes much deeper than the surface. The 'onion' is used on numerous occasions throughout the poem and the poem could be read replacing the word 'onion' with the word 'love' and as well as making sense the poem would mean almost exactly the same thing. Duffy's third stanza starts with one word, which stands totally alone, - 'Here.' ...read more.

Could this be an indication that Carol Ann Duffy does not want to commit? The fourth line of this stanza is one word long: 'Lethal.' This is a very unusual word to put into a love poem especially in such an ardent context. Duffy could, here, be illustrating the fact that love, like a lethal weapon, has to be handled with immense care. The penultimate line - 'Its scent will cling to your fingers,' - is referring to the idea that her love will never really leave her lover it will always be there like the scent of an onion. In this line there is a careful word choice, Duffy makes use of the word 'scent', she does not say smell or odour, which suggests that it is a pleasant aroma, not an awful stench. The final line of the poem contains another reference to violence, Duffy writes; its scent will 'cling to your knife.' This line is not begun with a capital letter, which could be implying that the scent is a bad thing this is, though contradictory to the implications in the previous line. These two poems are utterly different in style; they are though, similar in that they both express the individual poets' experiences, feelings and emotions connected with love. ...read more.