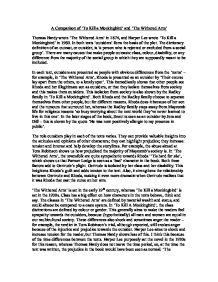 A Comparison of 'To Kill a Mockingbird' and 'The Withered Arm'

A Comparison of 'To Kill a Mockingbird' and 'The Withered Arm' Thomas Hardy wrote 'The Withered Arm' in 1874, and Harper Lee wrote 'To Kill a Mockingbird' in 1960. In both texts 'outsiders' form the basis of the plot. The dictionary definition of an outcast, or outsider, is 'a person who is rejected or excluded from a social group'. There are many causes that make people outcasts: class, colour, disability, or any difference from the majority of the social group in which they are supposedly meant to be included. In each text, outsiders are presented as people with obvious differences from the 'norm' - for example, in 'The Withered Arm', Rhoda is presented as an outsider by 'Their course lay apart from the others, to a lonely spot'. This immediately shows that other people see Rhoda and her illegitimate son as outsiders, or that they isolate themselves from society and this makes them outsiders. This isolation from society is also shown by the Radley family in 'To Kill a Mockingbird'. Both Rhoda and the Radley family choose to separate themselves from other people, but for different reasons. Rhoda does it because of her son and the rumours that surround her, whereas the Radley family stays away from Maycomb life for religious reasons 'so busy worrying about the next world they've never learned to live in this one'. ...read more.

There is some evidence to her being a witch, though she does not know it or wish this to be so 'something greater in the occult world than she had ever herself suspected'. In certain ways, Rhoda Brook can be compared to Boo Radley. Both characters are isolated by imposing male figures (Boo's father and Farmer Lodge), then isolate themselves - Boo because of his hermit-like ways, Rhoda because of her illegitimate child. Both characters are feared by society, and both are subjected to rumours. However, there is some evidence that Rhoda does have supernatural powers; whereas Scout fears Boo because of stories she has heard from Jem and adults. Boo adds fear and tension to the beginning of the novel, but as Scout grows older, she fears him less, and when she finally meets him she feels no fear at all 'Hello Boo'. I feel this relationship could also represent, or be a result of, Scout's changing outlook on the world. As she learns more about the Tom Robinson trial, and listens to people like Atticus and Ms Maudie, the influences on her life become much less prejudiced and her attitude towards other outsiders in the book changes. She refers much more to Atticus' philosophy: 'You never really understand a person until you consider things from his point of view', which increases her empathy with outsiders in the text. ...read more.

Both characters are very helpful, and will do jobs for nothing. Higher-class members of society use them for their skills. This makes Trendle and Tom quite similar underneath, though not so upon the surface. Trendle can also be compared to Boo, because both are outsiders that shape the final outcomes of the storylines. Both outcomes relate strongly to the social and historical contexts of the plots, and both seem to have morals. In 'The Withered Arm' I feel that one of the main morals is 'treat others as you would like to be treated' because Rhoda is punished for her malicious intent with the unneeded death of her son. Gertrude is also punished for her wishing for a person to die 'Oh - I hope not' (for the hanging not to go ahead), even when she knows that the person is innocent, with her own death. In 'To Kill a Mockingbird' I think that the main moral is, of course, Atticus' philosophy, which is based on the idea of empathy. From this empathy, Scout learns to be honest, kind and unprejudiced to everyone she meets. Scout also learns how to 'be a lady', but this is more to do with Alexandra teaching her about etiquette rather than specific morals in the plot. Both texts use pathetic fallacy: 'weather was unusually warm' and 'the wind howled dismally'. However, Harper uses hot weather to show tension, whereas Hardy uses wind and wet weather. ...read more.