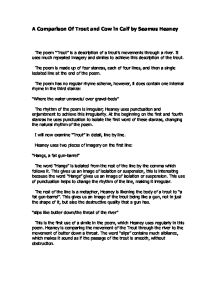 A Comparison Of Trout and Cow in Calf by Seamus Heaney

A Comparison Of Trout and Cow in Calf by Seamus Heaney The poem "Trout" is a description of a trout's movements through a river. It uses much repeated imagery and similes to achieve this description of the trout. The poem is made up of four stanzas, each of four lines, and then a single isolated line at the end of the poem. The poem has no regular rhyme scheme, however, it does contain one internal rhyme in the third stanza: "Where the water unravels/ over gravel-beds" The rhythm of the poem is irregular; Heaney uses punctuation and enjambment to achieve this irregularity. At the beginning on the first and fourth stanzas he uses punctuation to isolate the first word of these stanzas, changing the natural rhythm of the poem. I will now examine "Trout" in detail, line by line. Heaney uses two pieces of imagery on the first line: "Hangs, a fat gun-barrel" The word "Hangs" is isolated from the rest of the line by the comma which follows it. This gives us an image of isolation or suspension, this is interesting because the word "Hangs" gives us an image of isolation or suspension. This use of punctuation helps to change the rhythm of the line, making it irregular. The rest of the line is a metaphor, Heaney is likening the body of a trout to "a fat gun-barrel". ...read more.

"darts like a" This is another simile, it is saying that the trout darts, or moves around the water like a "tracer-bullet". The trout is being compared to a "tracer-bullet", something again, that is destructive. "A volley of cold blood" The word volley is being used in a destructive context, you will often use the word "volley" to describe say a "volley of arrows" or a "volley of bullets", but it is being used to describe the trout which makes the trout seem very destructive. The term "cold blood" is ambiguous - it has two meanings. The trout is a cold blooded animal, but it is also killing in "cold blood" which means that it is killing perhaps maliciously or cruelly. The poem ends with a single, isolated line: "ramrodding the current." The word "ramrodding" has a certain historical context. It usually refers to using a "ramrod" to force a charge down a firearm. Since the act of "ramrodding" occurred mainly a long time ago it could be that the actions of the trout described in this poem have also been going on for a long time. This carries on with the destructive and firearm images used throughout the poem. I will now examine the poem "Cow in Calf" by Seamus Heaney, and compare it to the poem "Trout". The title "Cow in Calf" tells us that the poem is about a pregnant cow. ...read more.

This is similar to the poem "Trout", where Heaney uses onomatopoeic words to describe some white water rapids. The third and final stanza of the poem is a summation of the cow's life. The first part of this stanza is a slightly humorous description of the cow's mooing. The sound is described as a monotonous "drone". Heaney may be attempting to convey that the cow's life is monotonous, or repetitive. The last two lines are an even briefer summation of the cow's life: "Her cud and her milk, her heats and her calves/keep coming and going" Her life is a continuous cycle, of producing milk, and of pregnancy. This summation is very different to the rest of the poem. The rest of the poem has an abundance of similes and imagery, this is absent from the ending, it is a brief, simple summation of the cow's life. The ending is similar to the ending in the poem "Trout". "Trout" finishes with a single isolated line, which is very different to the rest of the poem, the ending of "Cow in Calf", although it is not so separated from the rest of the poem; is very different to the body of the poem. I conclude, that these two poems by Seamus Heaney, are very similar, they are both poems of the natural world, and use many of the same poetic devices. However, I think that "Trout" is the more effective of these two poems, because it has a lot of very clear, repeated imagery. ...read more.

The essay writer has done a lot of useful analysis here, though s/he sometimes makes claims that are unsupported by the evidence indicated. There is little in the way of introduction or conclusion, so we do not know what the writer's intentions are or whether s/he has achieved them.

Paragraphing is generally poor and there are punctuation errors. Lexis is mostly up to the task.