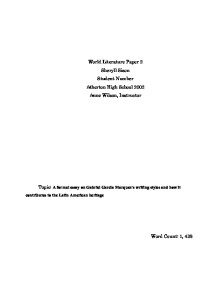 A formal essay on Gabriel Garcia Marquez&amp;#146;s writing styles and how it contributes to the Latin American heritage

World Literature Paper 2 Sheryll Sison Student Number Atherton High School 2002 Anne Wilson, Instructor Topic: A formal essay on Gabriel Garcia Marquez's writing styles and how it contributes to the Latin American heritage Word Count: 1, 438 Love in the Time of Cholera is a renowned book that has earned its place as one of the best literary works of the twentieth century. The author, Gabriel Garcia M�rquez offers his own Latin American culture to the reader, while incorporating his socialist views of society. In his novel, he not only includes bird and flower imagery, instances of irony, and foreshadowing, but also stylistic methods such as verb tense shifts, a structure of the Greek ideal play (in medias res), a creation of imagery associations among the characters and their names, and a list of definitions pertaining to the different types of love. In reading Love in the Time of Cholera, the reader is given the events and is left to ask the questions involving the how, instead of the what. The themes of the novel include the transcendence of love, the influence of fate, and the role of women in a chauvinist culture. With the writing styles and themes incorporated in the novel, Gabriel Garcia M�rquez informs his readers about the Latin American culture and his values about love and marriage. The novel is divided into six chapters, which is the arrangement of the ideal Greek plot structure. ...read more.

The foreshadowing styles of M�rquez are used to tell the ending of the story. M�rquez has no problem with giving away his ending. However, he slowly reveals how things got the way they are which makes the reader guessing on the situation. M�rquez wants his readers to know the basic plot and to question how the events fit into that plot. It is interesting to study the styles of M�rquez because he was able to captivate the audience even though he gave away the story. Another aspect to M�rquez's writing is referring to the instances of irony in the novel. The title itself is ironic because to have love in the time of cholera is rather odd. In addition, the plot has many ironic parts. The relationship of Florentino and Fermina, for example, is very ironic because it took fifty years for the love relationship to happen. Although it's unlikely to happen, the thought of having a huge gap of life trying to rekindle a youth love is quite impossible but as M�rquez conveyed in his novel, it can happen. Other examples of irony are incorporated with realism. The description of Florentino is an oxymoron because he is a romantic who can sweep many ladies but has "chronic diarrhea" and "hair follicle problems." Another example includes the romantic scene between Florentino and Fermina: Florentino hands a letter to Fermina and then a bird poops on the letter. ...read more.

The ideals of romantic love are obviously portrayed through the relationship of Florentino and Fermina, which is also juxtaposed to M�rquez's beliefs on love. The mentions of fate and destiny play important roles in the novel as they tie the whole story together. Furthermore, the women's role in a chauvinist society is also depicted in M�rquez's novel. These themes of magic realism weave not only the plot and the Latin American culture, but also M�rquez's ideals. The bird imagery, for example, is related to the many women that had become involved with Florentino Ariza. The notion of women in prostitution plays into the magical realism. Another example includes the taking of the husband's name after the husband has died. In the novel, Fermina Daza becomes Widow Urbino after Juvenal Urbino past away. Also, the title of being a widow was considered insignificant to the society. These customs play a major part in the Latin American society. The writing styles of M�rquez manifest the ideals of the Latin American culture. The choices made such as imagery associations, compare and contrast love relationships, and foreshadow, contribute to the magical realism and M�rquez's beliefs. With the writing techniques such as irony, M�rquez's accomplishes the humor of the plot line which keeps the reader attentive throughout the novel. The structure of the plot also contributes to the appeal of the novel because it keeps the reader predicting the events leading to the outcome. The writing styles and methods included in the novel have been a great contribution to the Latin American society as well as the world of literature. ...read more.