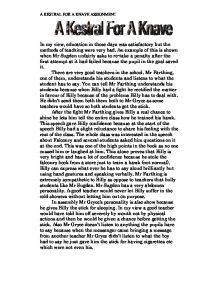 A Kestral For A Knave.

In my view, education in those days was satisfactory but the methods of teaching were very bad. An example of this is shown when Mr Sugden unfairly asks to re-take a penalty after the first attempt at it had failed because the pupil in the goal saved it. There are very good teachers in the school. Mr Farthing, one of them, understands his students and listens to what the student has to say. You can tell Mr Farthing understands his students because when Billy had a fight he rectified the matter in favour of Billy because of the problems Billy has to deal with. He didn't send them both them both to Mr Gryce as some teachers would have so both students get the stick. After the fight Mr Farthing gives Billy a real chance to shine he lets him tell the entire class how he trained his hawk. ...read more.

Mr Sugden has a very abdomen personality. A good teacher would never let Billy suffer in the cold showers without letting him out on purpose. In assembly Mr Gryce's personality is also show because he gives Billy the stick for sleeping. In my view a good teacher would have told him off severely by mouth not by physical actions and then he would be given a chance before getting the stick. Also Mr Gryce doesn't listen to anything the pupils have to say because when the messenger came bringing a message from another teacher Mr Gryce didn't listen to what the boy had to say he just gave him the stick for having cigarettes etc which were not even his. Billy was very keen to learn about falconry and to get that hawk because he trained the hawk without making any mistakes. ...read more.

This is true at home and at school. At home Jud bullies him and blames him for everything. At school the teachers tell him off, everyone overall bullies him. Billy doesn't care about anything (Education, work etc) except his hawk. He even admits it to Mr Farthing when he was talking to him. At the end of the novel it is very upsetting because it was like his life is over. "He buried the hawk and went to bed". In this sentence the atmosphere changes so much. All Billy wants it to get along and he wants to do what is asked of him. BUT in no means is Billy perfect because he was part of the lot that bullied the messenger to keep the cigarettes etc. I think Barry Hines has taken part of this from personnel experience as he expresses the bulling and violence scenes ever so strongly. ?? ?? ?? ?? A KESTRAL FOR A KNAVE ASSIGNMENT ...read more.