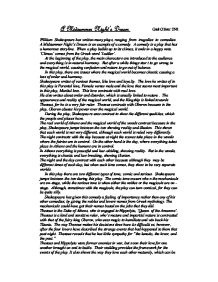 A Midsummer Night's Dream - an example of a Shakespearian comedy

A Midsummer Night's Dream Gail Oliver 2N1 William Shakespeare has written many plays, ranging from tragedies to comedies. A Midsummer Night's Dream is an example of a comedy. A comedy is a play that has a humorous storyline. When a play builds up to its climax, it ends in a happy note. 'Climax' comes from the Greek word 'Ladder'. At the beginning of the play, the main characters are introduced to the audience and everything is in natural harmony. But after a while things start to go wrong in the magical world, causing confusion and nature to go out of balance. In this play, there are issues where the magical world becomes chaotic causing a loss of order and harmony. Shakespeare writes of various themes, like love and loyalty. The love he writes of in this play is Parental love, Female verses male and the love that seems most important in this play, Marital love. This love contrasts with real love. He also writes about order and disorder, which is usually linked to nature. The appearance and reality of the magical world, and the Kingship is linked towards Theseus, for he is a very fair ruler. ...read more.

He is very much a creature of the night and he creates dreams which can cause chaos and confusion. Titania is quite a caring character in this play. She is in tune with nature, when she sees that Oberon and herself are causing chaos with their arguments. She shows that she would much rather desire harmony than chaos. She is also very passionate, as well as romantic and delicate. She shows this side of her, during her love for Bottom. You can see of her strength, bravery and pride when she stands up to Oberon because she is refusing to give him what he wants. Although they have many problems, at the end of the play, you can see that they are still very much in love. What Shakespeare is trying to say here is that a love which is strong, will not die. He is advocating love within marriage in this play. Oberon and Titania's marriage is quarrelsome but passionate. This is in contrast with Theseus and Hippolyta's love for one another. Hermia is the daughter of Egeus and love of Lysander and Demetrius. Her father is determined that she will marry Demetrius, but she goes against his wishes and runs away with Lysander into the woods. ...read more.

For example, whenever Bottom speaks he often muddles things up and gets things wrong, showing his character to be quite silly and clumsy, which makes him a comic character. Bottoms behaviour contrasts with that of Theseus' behaviour. Theseus is always trying to sort things out and make things right, at the same time as being sensitive. This shows his character to be mature, fair and considerate. To examine the personality of each character, you do not only look at what they say, but the pattern they speak in as well. When the magicals and nobles come on, they speak in verse and everything is spoken in rhyme. That contrasts with the mechanicals, for whenever they are on, they do not speak in verse. In this play, contrast is mirrored in its pages. In some ways, Shakespeare has been successful in his use of contrast. It has made the play clearer to understand. For example, what characters are comic or serious. But on the other hand, I feel that he has tried to be a little too clever by using too much contrast. By doing this, it has made some things harder to understand. Overall, Shakespeare has used contrast well because it helped me to imagine the two very different worlds and its people. ...read more.