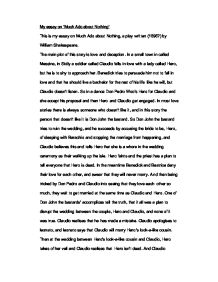 Much Ado about Nothing. There are many different themes of this play such as love, marriage, deception, loyalty and conflict. These themes come out through the characters actions, and their words.

My essay on 'Much Ado about Nothing' This is my essay on Much Ado about Nothing, a play written (1598?) by William Shakespeare. The main plot of this story is love and deception. In a small town in called Messina, in Sicily a soldier called Claudio falls in love with a lady called Hero, but he is to shy to approach her. Benedick tries to persuade him not to fall in love and that he should live a bachelor for the rest of his life like he will, but Claudio doesn't listen. So in a dance Don Pedro Woo's Hero for Claudio and she accept his proposal and then Hero and Claudio get engaged. In most love stories there is always someone who doesn't like it, and in this story the person that doesn't like it is Don John the bastard. So Don John the bastard tries to ruin the wedding, and he succeeds by accusing the bride to be, Hero, of sleeping with Barachio and stopping the marriage from happening, and Claudio believes this and tells Hero that she is a whore in the wedding ceremony as their walking up the isle. ...read more.

He also uses short, sharp abrupt phrases like "pause awhile..." Leonato builds up the feel of tension; panic and fear using double questions such as "what shall become of this? What will this do?" The most clearly shown mocking humour (to me) is "and I'll be sworn upon't that he loves her; for here's a paper written in his hand, a halting sonnet of his own pure brain fashioned to Beatrice". It is mocking humour because Claudio is teasing Benedick about how he feels for Beatrice, because he writ down a poem to Beatrice, which was badly written. Also mocking humour is shown when Hero is teasing Beatrice about writing a note saying that Beatrice is totally in love with Benedick."...Writ in my cousins' hand, stolen from her pocket containing her affection unto Benedick". Don Pedro is making fun of Benedick also shows mocking humour, "...You have such a February face..." This is referring to Benedick upset because he challenged Claudio to a duel. This play also has love and relationships such as; when Benedick is alone with Beatrice and Beatrice says "you have stayed me in a happy hour. ...read more.

If I was don Pedro I would be charming and calm towards everyone. Or if I was Claudio I would be in a happy and joyful mood, because I'm in love, and when after hearing that Hero is a whore, I would act angry and sad. If I was directing this I would make sure that the actors betray their emotions to the audience by making them put emotion and feeling behind the lines that their reading. In the first scenes I thought the best part was the dancing scene because the way that Beatrice was insulting Benedict in front of him, and she didn't know it was him because Benedick was wearing a mask. I found this scene funny and I understood it clearly. In the second scenes I thought the best part was when Claudio and Don Pedro tricked Benedict into making him realise that he loved Beatrice. Don Pedro and Claudio knew Benedict was there when they were saying that Beatrice loves him but she will not say it if u ask her. I found this scene funny, and I understood it clearly. That was my essay on 'Much Ado about nothing' written by William Shakespeare. ...read more.