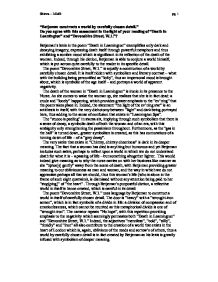 Betjeman constructs a world by carefully chosen detail. Do you agree with this assessment in the light of your reading of Death in Leamington and Devonshire Street, W.1.?

"Betjeman constructs a world by carefully chosen detail." Do you agree with this assessment in the light of your reading of "Death in Leamington" and "Devonshire Street, W.1."? Betjeman's lexis in the poem "Death in Leamington" exemplifies only dark and decaying imagery, expressing death itself through powerful metaphors and thus exhibiting a sombre mood which is significant in its reflection of the death of the woman. Indeed, through his diction, Betjeman is able to conjure a world himself, which is put across quite carefully to the reader in its specific detail. The poem "Devonshire Street, W.1." is equally a construction of a world by carefully chosen detail. ...read more.

The "stucco is peeling" in stanza six, implying through such symbolism that there is a sense of decay, a symbolic death of both the woman and of an era, with this ambiguity only strengthening the pessimism throughout. Furthermore, as the "gas in the hall" is turned down, greater symbolism is created, as this has connotations of a turning down of life - of a "grey decay". The very satire that exists in "Chintzy, chintzy cheeriness" is dark in its deeper meaning. The fact that a woman has died is anything but humorous and yet Betjeman includes such satire, perhaps to reflect upon a world in which we do not understand death for what it is - a passing of life - but something altogether lighter. ...read more.

The door is "heavy" with a "wrought-iron screen", which is in fact symbolic of a divide in life: a division of compassion and of emotionlessness, which cannot be reunited as this metaphorical divide is one of "wrought-iron". The narrator repeats "No hope", with this repetition providing emphasis to the negativity which seemingly permeates both "Death in Leamington" and "Devonshire Street, W.1." Indeed, the adjectives "merciless", "cold", "silly", "timidly" and "iron" all also contribute to the creation of a world that exists in the heart of London which is, again, oblivious of the needs and sorrow's of others, thus a world by carefully chosen detail is in fact created by Betjeman as his lexis is greatly infused with symbolism of deeper meaning. ?? ?? ?? ?? Shirwa - L6M0 pg. 1 ...read more.