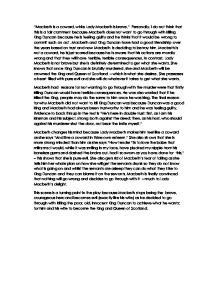 Macbeth is a coward, while Lady Macbeth is brave. Personally, I do not think that this is a fair comment because Macbeth does not want to go through with killing King Duncan

"Macbeth is a coward, while Lady Macbeth is brave." Personally, I do not think that this is a fair comment because Macbeth does not want to go through with killing King Duncan because he is feeling guilty and he thinks that it would be wrong to commit such an act. Macbeth and King Duncan have had a good friendship over the years based on trust and now Macbeth is deciding to betray him. Macbeth is not a coward, he is just scared because he is aware that his actions are morally wrong and that they will have terrible, terrible consequences. ...read more.

He was also worried that if he killed the King, people may do the same to him once he was king. The final reason for why Macbeth did not want to kill King Duncan was because Duncan was a good king and Macbeth had always been trustworthy to him and he was feeling guilty. Evidence to back this up in the text is "He's here in double trust: first, as I am his kinsman and his subject, strong both against the deed; then, as his host, who should against his murderer shut the door, not bear the knife myself." ...read more.

She also gets rid of Macbeth's fear of failing as she tells him her whole plan on how she will get the servants drunk so they do not know what is going on and whilst the servants are asleep they can do what they like to King Duncan and they can blame it on the servants. Macbeth is finally convinced that nothing will go wrong and decides to go through with it - much to Lady Macbeth's delight. This scene is a turning point in the play because Macbeth stops being the brave, courageous hero and becomes evil (exactly like his wife) as he decided to go through with killing the poor, old, innocent King Duncan to achieve what he wants: for him and his wife to become the King and Queen of Scotland. ...read more.