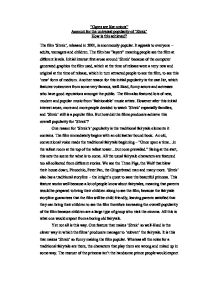 "Ogres are like onions" Account for the universal popularity of 'Shrek' How is this achieved? The film 'Shrek', released in 2001, is enormously popular. It appeals to everyone - adults, teenagers and children. The film has "layers" meaning people see the film at different levels. Initial interest first arose around 'Shrek' because of the computer generated graphics the film used, which at the time of release were a very new and original at the time of release, which in turn attracted people to see the film, to see this 'new' form of medium. Another reason for this initial popularity is the cast list, which features voiceovers from some very famous, well-liked, funny actors and actresses who have good reputations amongst the public. The film also featured lots of new, modern and popular music from 'fashionable' music artists. However after this initial interest arose, more and more people decided to watch 'Shrek' especially families, and 'Shrek' still is a popular film. But how did the films producers achieve this overall popularity for 'Shrek'? One reason for 'Shrek's' popularity is the traditional fairytale elements it contains. The film immediately begins with an old leather bound book. An old, conventional voice reads the traditional fairytale beginning - "Once upon a time...in the tallest room at the top of the tallest tower...but none prevailed." Being at the start, this sets the scene for what is to come. All the usual fairytale characters are featured too all collected from different stories. ...read more.

Another instance of a modern day object is Lord Farquaad's castle seen which Shrek and Donkey encounter trying to get Shrek's swamp back. Several things in the castle are modern for instance the animated information booth found in the courtyard. Both music and dance are modern and funny and is a favourite with viewers. The castle also has a parking area called 'Lancelot' similar to Madame Tussaud attractions like Alton Towers which is funny and modern which appeals to viewers who might have visited Alton Towers for example. Some more examples of modern day life in Shrek are the tournament which Lord Farquaad holds where instead of a traditional jousting fight, it is like a modern day wrestling match and another example is matrix style fighting Fiona performs against Robin Hood. By having lots of modern day life modifications, 'Shrek' gives the audience something to relate to and also adds an interesting and humourous twist to the film. This helps account for 'Shrek's' enormous popularity. However it is as easy as it sounds to put modern elements into a film like 'Shrek'. Not just any contemporary objects or themes can be put in. They need to fit in with the film and compliment the storyline. The elements also need to be suitable for the target audience, which is aimed at everyone meaning some elements would not be suitable to fit into 'Shrek'. Examples would be adult material or things to do with war like a nuclear bomb. ...read more.

There is another way that 'Shrek' appeals to an older audience through too. Shrek fits in lots of adult 'stuff' which is very clever because it appeals to adults and teenagers yet not being to obscene or offensive for children. This is sometimes dialogue like which tends to be humorous like when Shrek says "sure it's big enough but look at the location". This is a parody of estate agents and shows like 'Location Location Location'. Children wouldn't understand it at all, but adults would. Another example is Robin Hood's dance. The dance is very homosexual and Robin Hood is portrayed as gay. Adults find this funny, but children are not left out because the dance itself is humorous. It is seen at different levels. In conclusion I have learnt why and how 'Shrek' has become and still is a popular film. It achieves this popularity by the numerous techniques used in the film. The main reason I think there is for how popular the film is, is the humour it has. Lots of techniques create this, like the subverting of the fairytale, the dialogue and the modern day elements. Through this the film becomes very funny and attracts lots of attention. Another important reason for how well-liked 'Shrek' is how 'Shrek' can be seen at different levels. It appeals to different groups of people, and is attractive to them for different reasons. Adults enjoy the adult humour cleverly put in; children enjoy the fairytale story line, and the funny characters. All this makes 'Shrek' an enjoyable, humorous, family movie. That is why 'Shrek' is such a popular and well liked film. ...read more.