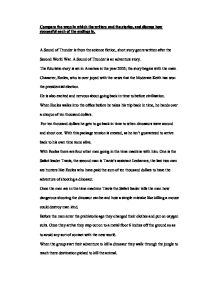 A Sound of Thunder is from the science fiction, short story genre written after the Second World War.

Compare the ways in which the writers and the stories, and discuss how successful each of the endings is. A Sound of Thunder is from the science fiction, short story genre written after the Second World War. A Sound of Thunder is an adventure story. The futuristic story is set in America in the year 2055; the story begins with the main Character, Eccles, who is over joyed with the news that the Moderate Keith has won the presidential election. He is also excited and nervous about going back in time to before civilisation. When Eccles walks into the office before he takes his trip back in time, he hands over a cheque of ten thousand dollars. For ten thousand dollars he gets to go back in time to when dinosaurs were around and shoot one. With this package tension is created, as he isn't guaranteed to arrive back to his own time zone alive. With Eccles there are four other men going in the time machine with him. One is the Safari leader Travis, the second man is Travis's assistant Lesbarnce, the last two men are hunters like Eccles who have paid the sum of ten thousand dollars to have the adventure of shooting a dinosaur. Once the men are in the time machine Travis the Safari leader tells the men how dangerous shooting the dinosaur can be and how a simple mistake like killing a mouse could destroy man kind. Before the men enter the prehistoric age they changed their clothes and put on oxygen suits. Once they arrive they step out on to a metal floor 6 inches off the ground so as to avoid any sort of contact with the new world. When the group start their adventure to kill a dinosaur they walk through the jungle to reach there destination picked to kill the animal. After waiting tensely with a "Sound of Thunder" the dinosaur arrives. ...read more.

As A Sound of Thunder was written in the future of the year 2055, the author Ray Bradbury obviously didn't see women becoming equal to men. Through out the two stories they both refer back to famous historical people and times in the past. A Sound of Thunder refers back to Alexander the Great, Caesar, Napoleon and Adolf Hitler and the year 1492 when America was discovered. The Body Snatcher refers back to the gruesome trials that took place in the early 19th century in Scotland, which were the famous grave robbers William Burke and William Hare. The stories are also very different in so many different ways. Apart from the genres of the stories and the years they were written in there are many differences in the stories. The titles of the stories are different in relation to their story. The title The Body Snatcher is a literal title, because the story is about body snatchers. With having a literal title this makes the genre of the story more realistic. The title A Sound of Thunder is a metaphorical title, the words a sound of thunder through out the story are used metaphorically like for example the bang of a gun, and the movement of the tyrannosaurs. With having a metaphorical title it emphasises the genre of the story which is science fiction giving the story more of a sense of adventure and mystery, entering the world of unknown going back in time. The use of language is also very different in the two stories The Body Snatcher is written in language of the early 19th century. The language in the story The Body Snatcher is often verbose with the use of words that are now no longer used for example words like crapulous, ensigns, indemnified, and gig. The Language is often very poetic through out the story with the uses of metaphors, similes, euphemism and oxymorons. ...read more.

He him self is a kind of slave for Mcfarnlane and Mr K. In the story at one point Fettus is referred back to as "the slave" making the metaphoric name more convincible. Through out the story each event that happens is a build up for the Climax at the end. With the discovery of greys body in the bag, which was meant to contain the dead farm's wife. An example of this build up for the ending is when Fettus is given a body bag containing a girl he knew called Jane Galbraith. This girl Jane the day before had been well and happy. Fettus then starts to think that her body had been got unfairly. And that they must of killed her. Another build up to the ending of Gray's dead late appearance. Is when Mcfarnlane, Fettus and Gray were out at lunch when Fettus passes a remark. "When we dislike a dead friend of ours, we dissect him." This is ironic because Gray is then killed and dissected. Making the story exciting with a mix of horror in it. I think the end of the story of "The Body Snatcher" keeps the level of horror and excitement going with out ending with and anticlimax. I think the twist at the end with appearance of Gray's body. Fits in just right making a realistic story of the early 19th century making the story mysterious, strange, scary and unusual. The stories ending I think will make people once readed the story, will think for a while about the ending and how it could of happened. The effect of the ending would have had a much greater impact on the people of the early 19th century when people did go out and snatch bodies from graves. The story also refers back in time to when two men in Edinburgh did kill people to supply the universities that studied Medicine. Making The Body Snatcher a realistic story to believe with crimes that happened at the time. ...read more.