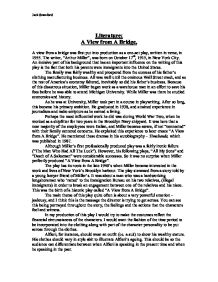 A View from A Bridge.

Literature; A View from A Bridge. A view from a bridge was first put into production as a one-act play, written in verse, in 1955. The writer, "Arthur Miller", was born on October 17th, 1915, in New York City. An incisive part of his background that has an important influence on the writing of this play is the fact that both his parents were immigrants into the United States. The family was fairly wealthy and prospered from the success of his father's clothing manufacturing business. All was well until the ominous Wall Street crash, and as the rest of America's economy faltered, inevitably so did his father's business. Because of this disastrous situation, Miller began work as a warehouse man in an effort to save his fees before he was able to attend Michigan University. While Miller was there he studied economics and history. As he was at University, Miller took part in a course in playwriting. After so long, this became his primary ambition. He graduated in 1938, and attained experience in journalism and radio scripture as he earned a living. Perhaps the most influential work he did was during World War Two, when he worked as a shipfitter for two years in the Brooklyn Navy shipyard. It was here that a near majority of the employees were Italian, and Miller became aware, if not "connected" with their family centered concerns. He exploited this experience to later create "A View from A Bridge". He mentioned these dramas in his autobiography - Timebends, which was published in 1987. Although Miller's first professionally produced play was a fairly ironic failure ("The Man Who Had All The Luck"). However, his following plays, "All My Sons" and "Death of A Salesman" were considerable successes. So it was no surprise when Miller perfectly produced "A View from A Bridge". The play has its roots in the late 1940's when Miller became interested in the work and lives of New York's Brooklyn harbour. ...read more.

Rodolfo and Marco's personalities are almost opposites, although they are both from the same background, their outlook on life differs. Rodolfo personality is that of any young person nowadays or anytime. He wants a fun exciting life and America he has found it and his love for Catherine. He has a frivolous, light-hearted attitude to life because he has none of the responsibilities Marco does. Rodolfo earns money and spends it, almost instantly on clothes and Catherine, this is one of the excuses Eddie uses to disparage Rodolfo. However, this is one of the things that attract Catherine, and Rodolfo is a genuine person who truly loves Catherine. Marco is serious, hardworking man who has responsibilities to feed his starving wife and children. Marco is a stronger more reticent man whose main priority is for his family. That is why when Eddie deliberately embarrasses Rodolfo Marco takes it as an offence himself and threatens Eddie subtly. He does this by showing his strength and power to Eddie. "The chair raised like a weapon over Eddie's head... a glare off warning into a smile of triumph" Marco here shows Eddie that he shouldn't with either him or his family, Marco still very much believes in Italian justice. As a director I would look at how the actors/actresses reveal the characters using movement, gesture and voice. Catherine is a particular important character in the play as it shows how her independence starting to shoe through and her adulthood starting to emerge. At the beginning of the play Catherine's body language and gestures should be that of a child. This is because she dotes on Eddie and, he is the father figure in her life and she acts like a child around him. She should speak like a child as well, asking for permission and pleading for approval from Eddie and Beatrice her parental guardians. "I just got it. ...read more.

This is because the audience should feel as if they have just witnessed almost one of Alfieri's memories. I think the audience should feel that as Eddie's body and Beatrice fade out of view so do they and their lives. It gives a final edge of sadness and thoughtfulness especially as Alfieri will come onto the stage in spotlight and give his final speech. "And yet it is better to settle for half, it must be!" The video was performed well and was very much like how I envisioned the play. I thought the costumes and the sets were carefully thought out and produced. They highlighted just how much poverty the Carbones lived in. The actors/ actresses acted how I had imagined they would have. The characters and personalities matched how the characters acted in the actual written play that was read. The way the scenes were performed in the video was accurate and followed the way the play worked in Arthur Miller's original written version. The actors/actresses in the video acted skilfully to produce the right amount of tension throughout the play and this benefited the play as the tension grew and the climatic ending grew nearer. I think that the video was executed well and I enjoyed it more then reading the play as seeing the play in action adds to the tension and you can see the story unravel much better then you can when reading the play. I think that 'The View from the Bridge' is a classic story of definite jealousy, anger, betrayal and love that people can understand and sympathize with. It provokes reactions and thoughtfulness out of anyone who sees it and you can't help but empathize with the characters in the play. It is strong speculation that this play will continue to maintain as successful as it is in theatres today. After so many years, no matter what year we live in, this play will find an influence on you anyway it possibly can. ?? ?? ?? ?? Jack Stamford ...read more.