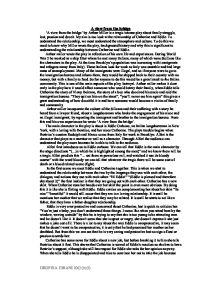 A view from the bridge 'A view from the bridge' by Arthur Miller is a tragic intense play about family struggle, lust, passion and deceit. My aim is too look at the relationship of Catherine and Eddie. To understand the relationship, we must understand the atmosphere and culture. To do this we need to know why Miller wrote the play, background history and why this is significant to understanding the relationship between Catherine and Eddie. Arthur miller wrote the play in reflection of his own life and experiences. During World War 2 he worked as a ship fitter where he met many Italians, many of which were Sicilians like the characters in the play. At the time Brooklyn's population was increasing with immigrants and refugees many from Italy). These Italians look for work as Italy was unstable and had large mass of unemployment. Many of the immigrants were illegal, and so if anyone were to go to the immigration bureau and inform them, they would be shipped back to their country with no money, but with a family to feed. So for anyone to do this would be a great insult to the Italian community. This is one of the main aspects of the play, betrayal. Arthur miller makes it clear early in the play how it would affect someone who would betray their family, when Eddie tells Catherine the story of Vinny Bolzano, the story of a boy who deceived his uncle and told the immigration bureau. "They spit on him on the street", "you'll never see him again" this gives a great understanding of how deceitful it is and how someone would become a victim of family and community. Arthur miller incorporate the culture of the Silicans and their suffering with a story he heard from a lawyer friend, about a longshoreman who broke the engagement of his niece and an illegal immigrant, by reporting the immigrant and brother to the immigration bureau. ...read more.

He tries to prove to her that Rudolpho is only after her citizenship but Catherine backfires and tries to convince Eddie that Rudolpho is a good man and that he really does like her. She feels frustrated that Eddie doesn't like him '(sobbing) I don't believe it and I wish to hell you'd stop it.' Eddie feels that he has parted from her 'I don't see you no more I come home you're running around some place' after this Catherine's views and respect for Eddie may of changed, Catherine sees Eddie as an interfering fool. Beatrice has a talk with Catherine and from this we can see the respect she has for Eddie. 'It seems so wrong if he is against it so much' this shows that she sees him as a father and only wants his permission and happiness 'he looks so sad now and it hurts me'. From Beatrice's point of view we can see that she still acts like a 'baby' she tries to make Catherine realise that she has grown up and she should be more independent. 'You throw yourself at him like when you were 12 years' from this I can see that she wants and feels that she is a mature woman but doesn't realise that she still wants to feel like a child again. Beatrice can sense what is happening she knows that Eddie has some sort of feelings for Catherine 'when am I gonna be a wife again?' towards Eddie referring to when she will be loved again. She can tell there is something wrong and that he has some concern for Catherine, but Catherine has no fault in this. So Beatrice tries to make Catherine realise that she should be more independent and change her ways. At this conversion Catherine starts off frustrated and angry with Eddie but towards the end she pities him and realises that she has to let go of him and grow up. ...read more.

Arthur Miler has made atmosphere tense and drastic by using silence and Eddie's foolishness. But his actions have frightened both of them and Catherine decides to go, Eddie's last option is to threaten Rudolpho, to report him to the immigration bureau. Eddie is still convinced that Rudolpho is gay and so he has to stop them getting married, so he returns to Alferi for advice. But Alferi still tells him that there is nothing he can do, but Eddie's jealousy is uncontrollable and so his last solution is to call the immigration bureau. After which he returns home and Catherine invites him to her wedding and finds out that there are other illegal immigrants living in the flat. After the invite he feels guilty for what he has done, and feels that he has to make her see sense about the other two lodgers. "How do you know they're not tracking these guys?" But it is too late and the real immigration bureau comes to take the brothers. They all know that Eddie was the one who told the immigration bureau, with frustration Marco lashes out at Eddie. The consequences were harsh, as Eddie becomes a victim of his own crime. In conclusion Eddie's jealousy and passion destroyed everyone's lives and received no achievements for himself. His passion for Catherine grew strong along with his jealousy. In the end his name was hated, he is seen as selfish, unthoughtful and deceitful. As there is a time gap in the play we can tell what the development of the relationship is. From the beginning there was a happy, and calm atmosphere. But towards the end the relationship is faint and there is a lack of communication, they grew apart as others could see the future so their duty was too keep them apart. Catherine was to blind to see what Eddie's thoughts of her were as she felt there was no reason to part from him, and Eddie was to jealous and stubborn to part From Catherine. ?? ?? ?? ?? DRUPIXA HIRANI 10G (hu3) ...read more.