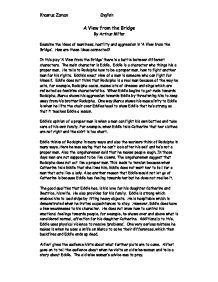 Examine the ideas of manliness, hostility and aggression in ‘A View from the Bridge’.  How are these ideas connected?

In this play ‘A View from the Bridge’ there is a battle between different characters.  The main character is Eddie.  Eddie is a character who things his a proper man.  He tells to Rodolpho how to be a proper man, how to fight another man for his rights.  Eddie’s exact view of a man is someone who can fight for himself.  Eddie does not think that Rodolpho is a real man because of the way he acts, for example, Rodolpho cooks, makes lots of dresses and sings which are reflected as feminine characteristics.  When Eddie begins to get rude towards Rodolpho, Marco shows his aggression towards Eddie by threatening him to keep away from his brother Rodolpho.  One way Marco shows his masculinity to Eddie is when he lifts the chair over Eddies head to show Eddie that he’s strong so that it teaches Eddie a lesson.

Eddie’s opinion of a proper man is when a man can fight his own battles and take care of his own family. For example, when Eddie tells Catherine that her clothes are not right and the skirt is too short.

Eddie thinks of Rodolpho in many ways and also the workers think of Rodolpho in many ways. Here he was saying that he can’t look after his self and he’s not a proper man. Also the longshoremen said that he makes people laugh. In those days men are not supposed to be like clowns. The longshoremen suggest that Rodolpho does not act like a proper man. This leads to tension because when Catherine tells Eddie that she likes him, Eddie does not want her to fall for a man that acts like a lady. Also another reason that Eddie would not let go of Catherine is because Eddie has feeling towards her but he does not realise it.

The good qualities that Eddie has, is his love for his daughter Catherine and Beatrice, his wife.  He also provides for his family.  Eddie is strong which enables him to load ships by lifting heavy objects.  He is hospitable which is demonstrated when he invites acquaintances to stay.  However, Eddie does have a few weaknesses to his character.  He does not know how to control his emotional feelings towards people, for example, he shows over and above what is considered normal, affection for his daughter Catherine.  Additionally to this, Eddie uses physical violence to resolve ‘problems’.  One very serious mistake he makes is when he uses a knife on Marco to solve their differences, which then backfires and Eddie ends up dead.

One lesson that we learn from Eddie, is that you cannot resolve your differences using violence. A tragic hero is a person who moves from happiness to misery through some weakness in error or judgement.  Eddie was a perfect example of a tragic hero.

At the end of Act I, you can see the tension that builds up between Eddie and Marco.  After Eddie has his fight against Rodolpho, Marco gets angry and tries to teach Eddie a lesson by not resorting to physical violence by on the contrary, by lifting a chair over Eddie’s head in a threatening manner.  This is where Eddie’s manliness leads him and Marco to conflict.

Eddie finds it very difficult to express his feelings in threatening situations which he react to by using physical and verbal abuse.  When Eddie realises that he could loose his beloved daughter, Catherine, he uses physical violence on Rodolpho.  The main threat to Eddie is Rodolpho, by Rodolpho taking Catherine out and not bringing her back on time, he cleverly knows that he is annoying Eddie.

There a re two main female characters in the play, Catherine and Beatrice.  Beatrice plays the role of Eddie’s downtrodden wife and Catherine, his beloved daughter.

The relationship between Eddie and his wife is strained because his emotions and feelings are directed towards Catherine then Beatrice.  As the story develops, Catherine starts to change her dressing style and attitude towards Eddie and more to please Rodolpho.  Beatrice encourages Eddie to give Catherine some room, but his feelings are strong and confused towards his daughter that he does not realise that the love he has for Catherine is not normal.

Alfieri has two different roles in the play.  He is a narrator and a lawyer.  The most important role is of the narrator.  As a narrator he gives information on Eddie’s life which could be missed if you watched or read this play independently. One particular piece of information that Alfieri departs on Eddie, is of Eddie’s feelings on Catherine.

The title ‘A View from The Bridge’ is ambiguous. There are two meanings from this title.  The first is that he Alfieri is the bridge and is connecting the audience with the characters and their lives and secondly is Alfieri is giving his view from the bridge to the audience.

There are six main characters in the play, Eddie, Catherine, Beatrice, Alfieri, Rodolpho and Marco.  Eddie, Catherine and Beatrice are uneducated and from a working class background.  Therefore, in particular Eddie finds demonstrating

Alfieri is highly educated which enables him to play his role as a lawyer and converse with the audience as the narrator.Rodolpho and Marco, on the other hand are uneducated and this makes it difficult for them to communicate with Eddie.

The play ‘A view from the Bridge’ is very good. The actors act in various different ways. Eddie should act in a gangster type of way. On the other hand Alfieri should act like a rich man. Catherine and Beatrice should be simply dressed. Last of all Marco and Rodolpho should have an Italian accent and Marco should be well built.

The play ‘A view from the bridge’ is set in Red Hook New York in the 1950’s.  Alfieri views the play from the Brooklyn Bridge.  Alfieri described Red Hook as the slum that faces the bay. He suggested that Red Hook is full of nasty things.  Also he says that Red Hook is the gullet of New York.  Here he’s suggesting that Red Hook is the tough part of New York.  Red Hook is the place where most illegal immigrants live.  This has a bad influence on the characters.  The social class of the Carbones is not very good, they have very poor language skills.  Eddie earns his living in a hard way, he loads and unloads ships.  Eddie also carries a flick knife to protect himself on the streets of Red Hook. This gives us an understanding that Red Hook is a dangerous place to live. The play has criticized the American way of life.  I do not think that people have been discriminated by the play because it seems to be the truth.  Finally, I thought the play was fantastic.  It has a great storyline.  The acting of the different characters is very good and I think the idea of Greek tragedy is great.