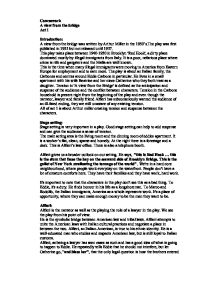 A view from the bridge - how does arthur miller create tension

Coursework A view from the bridge Act 1 Introduction: A view from the bridge was written by Arthur Miller in the 1950's.The play was first published in 1955 but not released until 1957. This play takes place between 1940-1950 in Brooklyn 'Red Hook', a dirty place dominated mostly by illegal immigrants from Italy. It is a poor, nefarious place where crime is rife and gangsters and the Mafia are well known. This is the time when many illegal immigrants were moving to America from Eastern Europe for employment and to earn more. The play is about an Italian family, the Carbones and centres around Eddie Carbone in particular. He lives in a small apartment with his wife Beatrice and her niece Catherine who they both treat as a daughter. Tension in 'A view from the Bridge' is defined as the anticipation and suspense of the audience and the conflict between characters. Tension in the Carbone household is present right from the beginning of the play and even though the narrator, lawyer and family friend Alfieri has subconsciously warned the audience of an ill-fated ending, they are still unaware of any existing tension. All of act 1 is about Arthur miller creating tension and suspense between the characters. Stage setting: Stage setting is very important in a play. Good stage setting can help to add suspense and can give the audience a sense of tension. The main acting area is the living room and the dinning room of eddies apartment. It is a worker's flat, clean, sparse and homely. At the right there is a forestage and a desk. This is Alfieri's law office. ...read more.

Because Eddie never completely denies his feelings to either Beatrice or Alfieri, but rather brushes them off, it seems he may be unconsciously aware of them. This unconscious knowledge of sexual taboo drives Eddie into a self-serving and destructive madness that he cannot control. Eddie's greatest fear is not Marco, Rodolpho, or even the loss of his name. What Eddie fears most is the disclosure of his secrets-he fears his own being. Themes: Family: Beatrice, Catherine and Eddie are a loving family. Marco also loves his family who are in Italy. Marco comes to America so can earn more and send more back to his family in Italy. By telling us about the character of Vinny Bolzano, Arthur Miller shows us how important it is to stay loyal and not betray your family. Eddie forgets the very words that he made clear to Catherine "Just remember, kid, you can quicker get back a million dollars that was stole than a word that you gave away" This quote reveals the irony and madness of Eddie's character. Eddie tells the story of a young boy who called immigration on his relatives. Eddie lectures Catherine about how they must tell no one about Marco and Rodolpho, the illegal immigrant cousins the family will be hiding. However, in the end of the play, Eddie obviously calls Immigration on these cousins, just like the boy. Miller sets up Eddie so vehemently against betrayal that his transition to the betrayer seems illogical. The set-up requires Eddie to undergo a drastic change, if not complete breakdown, within the play to make such a transition. The force of this transition reveals not only his self-destructive madness, but the deepness of his unspoken love for his niece. ...read more.

For example, when Eddie has just insulted Rodolpho and there is a silence: "Eddie [sits on his rocker]: Well, that's all I'm askin" "Eddie reads his paper. There is a pause an awkwardness. Now Catherine gets up and puts a record on the phonograph-Paper Doll" This is an uncomfortable moment of tension. Catherine breaks the silence by putting on Paper Doll, but it creates more tension by amplifying the friction between Catherine, Rodolpho and Eddie. Catherine also uses it as a means of provoking Eddie by asking Rodolpho to dance. This scene is a complete contrast to earlier on in the play where Miller showed Catherine to be obedient and respectful towards Eddie. This sudden change in Catherine's behaviour is partly due to the conversation earlier on in the play with Beatrice: Beatrice: "You still think you're a little girl, honey. But nobody else can make up your mind for you any more, you understand?" Beatrice is telling Catherine to become more independent from Eddie and this is why Catherine has changed so much by the end of Act one. This scene develops the plot of the play putting images into the audiences heads of what is to come. The audience will get the feeling that a disaster will happen between the men. Miller does this by gradually building up the tension between all the characters. Conclusion: In conclusion, Act 1 is a very effective close to the scene as it is packed with tension, making it gripping and definitely making the audience want to find out more. There is an incredible amount of tension during the chair lifting. The stage directions note that Eddie is sizing up Rodolfo, and there is a concealed suspicion. This is appropriate, as the scene becomes more exciting and tense during this dramatic event. ...read more.