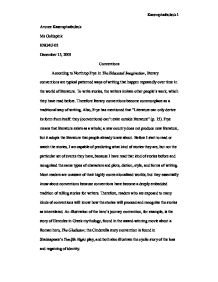 According to Northrop Frye in The Educated Imagination, literary conventions are typical patterned ways of writing that happen repeatedly over time in the world of literature. To write stories, the writers imitate other people's work

Arunee Kasemphaibulsuk Ms Goldspink ENG4U-02 December 15, 2005 Conventions According to Northrop Frye in The Educated Imagination, literary conventions are typical patterned ways of writing that happen repeatedly over time in the world of literature. To write stories, the writers imitate other people's work, which they have read before. Therefore literary conventions become commonplace as a traditional way of writing. Also, Frye has mentioned that "Literature can only derive its form from itself: they (conventions) can't exist outside literature" (p. 15). Frye means that literature exists as a whole; a new country does not produce new literature, but it adopts the literature that people already knew about. Before I start to read or watch the stories, I am capable of predicting what kind of stories they are, but not the particular set of events they have, because I have read that kind of stories before and recognized the same types of characters and plots, diction, style, and forms of writing. Most readers are unaware of their highly conventionalized worlds, but they essentially know about conventions because conventions have become a deeply embedded tradition of telling stories for writers. Therefore, readers who are exposed to many kinds of conventions will know how the stories will proceed and recognize the stories as interrelated. ...read more.

Overall, he succeeds by meeting with his perished wife and children in the afterlife. As in these examples, conventions can stimulate curiosity in the audience about how the story will turn out to be different from other stories. For instance, the woman character in The Gladiator helps Maximus instead of trying to kill him. The modern movie The Gladiator follows the hero's journey convention as does the story of Hercules in Greek mythology. Another story, Cinderella, is the fairy tale convention of the transformation from the poor, lowly maid to the princess. This kind of story is romantic as one character becomes powerless and falls in love with another character, who has a higher status. With the help from another character, the maid transforms back, regains her power, and attracts and marries the beloved one in the end. For example, Cinderella has become powerless after her mother dies and her father marries a cruel woman. Cinderella is required to clean the house, prepare meals, and sleeps in the ashes. Another example of the convention is her love of the unreachable prince; however, with the birds' help, she transforms into a beautiful woman and dances with the prince who falls in love with her. ...read more.

As neither Cinderella nor Viola can have the man they want at the beginning, both of them always daydream and suffer until the happy endings. Therefore, people who are familiar with the conventions not only find the story entertaining or as a means for them to escape their ordinary lives, but also understand that too much love can cause suffering and desperation. They will maintain their love for themselves in real life rather than give all of their hearts to their lovers. By contrast, people who have never read the Cinderella story nor watched the play Twelfth Night will hardly recognize the theme of love in other stories and never try to ponder the cause of pain they suffer in their personal love lives, so they will think that the other person who hurts them is wrong, and that life treats them badly. Another example is The Gladiator movie that has influenced me to become stronger. Because I can imagine myself as Maximus, I also feel calmer every time I face difficulties and become discouraged. Therefore, literary conventions in the form of either popular media or literature have values worth studying, because they inspire and help build people's imagination in the way they look at their world and act in their real lives. ...read more.