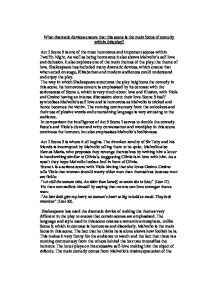 Act 2 scene 5 Twelth night - What dramatic devices ensure that this scene is the main focus of comedy within this play?

What dramatic devices ensure that this scene is the main focus of comedy within this play? Act 2 Scene 5 is one of the most humorous and important scenes within Twelfth Night. As well as being humorous it also shows Malvolio's self love and delusion. It also explores one of the main themes of the play; the theme of love. Shakespeare has included many dramatic devices, which ensure that when acted on stage, Elizabethan and modern audiences could understand and enjoy the play. The way in which Shakespeare structures the play heightens the comedy in this scene. Its humorous content is emphasised by its contrast with the seriousness of Scene 4, which is very much about love and illusion, with Viola and Orsino having an intense discussion about their love. Scene 5 itself symbolises Malvolio's self love and is humorous as Malvolio is tricked and hence becomes the victim. The running commentary from the onlookers and their use of plosive words and entertaining language is very amusing to the audience. In comparison the intelligence of Act 3 Scene 1 serves to double the comedy. Feste's and Viola's clever and witty conversation and wordplay in this scene continues the humour, but also emphasises Malvolio's foolishness. Act 2 Scene 3 is where it all begins. The drunken revelry of Sir Toby and his friends is interrupted by Malvolio telling them to be quiet. Malvolio also blames Maria, who proposes they revenge themselves by writing him a letter in handwriting similar to Olivia's, suggesting Olivia is in love with him. ...read more.

If this was to be presented by a director he could show them being very clumsy, making them very amusing to watch and every so often them coming very close to being seen by Malvolio. Malvolio creates a range of response in the audience's mind through the devices of the soliloquy and the letter. The audience learns more of Malvolio's thoughts and absurdity in his attitude. At first he is a most unlovable character but he has our sympathy for the way he is treated by Sir Toby and Maria. The audience's reaction soon changes when he reads the letter aloud and this ensures that the audience now have little sympathy with him. They would also enjoy the spectacle of a puritan being gulled in this way. Shakespeare uses dramatic irony to enhance the humour in the scene because the audience have prior knowledge of the letter left to trick Malvolio. This makes it even more humorous when Malvolio starts to read it. He has trouble working out what "M.O.A.I." (Line 91) stands for, which makes it very comical for the audience to watch. The letters have no special significance except that they are readily recognisable as forming part of Malvolio's name, enough for him to interpret the letter as addressed to him, as he sees only what he wants to see: "M' Malvolio - why, that begins my name! (Line 106). The director would have to think about how Malvolio speaks and behaves when reading the letter. ...read more.

They cannot respond to this without giving themselves away, so there is a lot of anger amongst them. Another entertaining moment is when Malvolio says something of a sexual nature: "these be her very c's, her u's, and her t's, and thus makes she her great P's" (Lines 72-73). The lower classes of the Elizabethan audience would have found this hilariously funny. To add to the comedy Sir Andrew does not know what Malvolio is talking about and almost shouts out what it means: "Her c's, her u's and her t's: Why that?" (Line 75). This could have been made funnier by one of the other characters quickly stopping him from saying this by putting their hand over his mouth. At the end of the play the confusion is all cleared up, but it isn't a perfectly happy ending. Shakespeare tries to put across to the audience that Malvolio has learnt absolutely nothing from his mistakes, and emphasizes this by showing most of the characters getting what they deserve. Viola's been loyal to Orsino and ends up marrying him and Olivia gets married to Sebastian. The main devices used by Shakespeare do ensure that this is a comic scene. He has made sure in every way possible that all varieties of people enjoy the comedy, however making sure that they also have mixed feelings towards Malvolio. He has done this by placing the scene in a very good position, letting the characters use humorous language and placing the self-obsessed character Malvolio into the play. Jenny Willis ...read more.