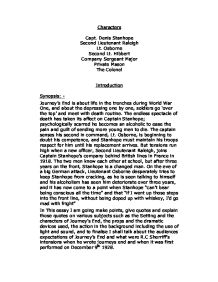 Act one of Journey's End.

Characters Capt. Denis Stanhope Second Lieutenant Raleigh Lt. Osborne Second Lt. Hibbert Company Sergeant Major Private Mason The Colonel Introduction Synopsis: - Journey's End is about life in the trenches during World War One, and about the depressing one by one, soldiers go 'over the top' and meet with death routine. The endless spectacle of death has taken its affect on Captain Stanhope; psychologically scarred he becomes an alcoholic to ease the pain and guilt of sending more young men to die. The captain senses his second in command, Lt. Osborne, is beginning to doubt his competence, and Stanhope must maintain his troops respect for him until his replacement arrives. But tensions run high when a new officer, Second Lieutenant Raleigh, joins Captain Stanhope's company behind British lines in France in 1918. The two men knew each other at school, but after three years on the front, Stanhope is a changed man. On the eve of a big German attack, Lieutenant Osborne desperately tries to keep Stanhope from cracking, as he is seen talking to himself and his alcoholism has seen him deteriorate over three years, and it has now come to a point when Stanhope "can't bear being conscious all the time" and that "if I went up those steps into the front line, without being doped up with whiskey, I'd go mad with fright" In This essay I am going make points, give quotes and explain those quotes on various subjects such as the Setting and the characters of Journey's End, the props and the dramatic devices used, the action in the background including the use of light and sound, and to finalise I shall talk about the audiences expectations of Journey's End and what were R.C Sherriff's intensions when he wrote journeys end and when it was first performed on December 9th 1928. I also think that the first act is very effective at setting the tone of the play. ...read more.

In the beginning Hardy and Osborne talk about Stanhope and tell us how he is a "drunkard", and so before we even meet Stanhope we already know what behaviour to expect, they also tell us that Stanhope is a brave, young and determined commander, and this also adds to the audiences expectations of Stanhope before we even meet him, but still Osborne and Hardy still disagree about Stanhope. Osborne helps to develop his character by becoming a good listener to Stanhope and he develops a sort of "agony uncle" aura about him when he and Stanhope are talking, and he tells Stanhope how Raleigh looks up to him so much "I believe Raleigh'll go on liking and looking up to you, through everything, there's something very deep and rather fine about hero-worship", and I think that this may also be symbolic of someone that Sherriff may have met in the war and he has decided to immortalise them in his literature. Captain Stanhope - we first hear about Stanhope from Hardy and Osborne when they tell us how Stanhope enjoys drinking Whiskey. We discover this for ourselves later in the play as Stanhope is revealed as an Alcoholic, his speech degenerates as he drinks more and eventually he ends up literally legless and uses such phrases as "I go sleep now" and he sounds like a child. Plus when he drinks whiskey he opens up and is able to have deep conversations, rather than his usual self where he uses sharp short commands as speech instead of long and deep sentences that you can tell he has really thought about. Stanhope's drinking takes us on a sort of journey as he drinks more and more. He goes from using sharp and short sentences - to deep and meaningful ones, he then gets to a stage when he is slurring his words and becomes completely incoherent. ...read more.

soldiers etc, and whereas today we can use media to record what is happening, in terms of WW1 we can only rely on plays and stories that were written at the time, for convincing evidence to what went on during WW1, and so our only real source (apart from soldiers that were in WW1) is the literature and poetry that has immortalised this event in history forever. In my opinion I think that Journey's End is a really good play and that it communicates well the mental and psychological turmoil's of the First World War, I think it is incredibly realistic, and that Sherriff's attention to detail indicates to us that he was in fact in the war and that it is most probable that the characters we meet in Journey's End are those that R.C Sherriff met whilst he was in the trenches, and I think that the fact that R.C Sherriff has decided to share this experience with us is very admirable and that the realism of this improves Journey's End ten fold. Act one of Journey's End sets the tone for the rest of the play by introduces us to all of the characters in succession and by starting the play with just Hardy and Osborne talking to each other, this creates tension and makes the audience want to lean in to the story to learn more. This also happens when Stanhope is talking to "Uncle" Osborne, and in many other instances. This makes the audience feel more involved. Act 1 is quite serious, as apart from the introductions to the characters we get to know most of the characters inner selves such as that Stanhope is really a alcoholic, and isn't as brave as everyone thinks he is, we get this from each character individually as they enter and as some of the soldiers talk about them, all in all I think that Journey's End by R.C Sherriff is a 'Jolly good one' and I thoroughly enjoyed writing about it. ...read more.