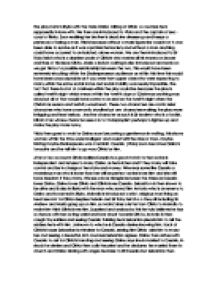 All about Twelfth Night. The play starts in Illyria with the Duke Orsino talking of Olivia

The play starts in Illyria with the Duke Orsino talking of Olivia a countess he is supposedly in love with. We then are introduced to Viola and the captain at sea-coast of Illyria. Soon realising her brother is dead she dresses up and keeps a pretence of being a man. This is because without a male figure she would not have been able to survive as it was a patriarchal society and without a man anything could have occurred to an isolated, alone woman. We are then introduced to Sir Toby Belch who is a drunken uncle of Olivia's who wastes all his money on booze and lives of his niece Olivia. Maria a lady in waiting is also introduced and early on we get hints of a possible relationship between the two, this would have been extremely shocking within the Shakespearean audience as within this time this would have been unacceptable as if you were from upper-class who were expecting to marry within the same social status and social mobility was nearly impossible. The fact that there is a lot of craziness within the play could be because the play is called twelfth night which mean within the twelfth days of Christmas anything was okay but all of that would have come to an end on the twelfth night when the Christmas season and festivity would end.  These two characters are comic relief characters who have a romantic storyline but are characters making the play more intriguing and least serious.  Another character as such is Sir Andrew who is a foolish, idiotic man whose character uses a lot of malapropism perhaps to lighten up and make the play more funny.

Viola then goes to work for Orsino soon becoming a gentleman in waiting, this shows women within the time were intelligent and could fulfil the roles of men, maybe hinting maybe Shakespeare was a feminist. Cesario  (Viola) soon becomes Orsino's favourite and he tell him to go woo Olivia for him.

After a few accounts Olivia realises Cesario is a good match for her as she is independent and refuses to marry Orsino as he is richer and if they marry will take control and be in charge of her state and money. Whereas some like Cesario a mysterious man who is lower than her will be perfect as she loves him and she will have freedom if they marry. We see a love triangle between the three as Cesario loves Orsino, Orsino loves Olivia and Olivia loves Cesario. Sebastian is then shown to be alive and is also in Illyria with the man who saved him Antonio who is an enemy to Orsino and is wanted in Illyria. Malvolio is introduced a strict, religious man living as head servant for Olivia despises Febain and Sir Toby Beltch so they all including Sir Andrew and Maria gang up on him, so Maria fakes a letter from Olivia to Malvolio to make him think Olivia loves him. Surprised and anxious by this he truly believes he has a chance with her acting weird and love struck towards Olivia. Antonio is then caught by soldiers and seeing Cesario thinking he is Sebastian pleads him to tell the soldiers he is with him. Unknown to who he is Cesario denies knowing him. Back at Olivia's house Sebastian is mistakes for Cesario, seeing him Olivia asks him to marry her and seeing a beautiful, rich countess Sebastian agrees. Orsino then arrives with Cesario to ask for Olivia's handing and seeing Orsino says she is married to Cesario, in shock he denies and Olivia then calls the priest and he declares he married them in church and Orsino blaring with anger declares to kill Cesario but Sebastian then arrives and the brother and sister unite. Cesario reveals herself as a women and Orsino falls in love with her promising to marry her.