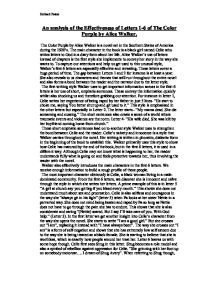 An analysis of the Effectiveness of Letters 1-6 of The Color Purple by Alice Walker.

An analysis of the Effectiveness of Letters 1-6 of The Color Purple by Alice Walker. The Color Purple by Alice Walker is a novel set in the Southern States of America during the 1920's. The main character in the book is a black girl named Celie who writes letters to God in a diary form about her life. Alice Walker's use of letters instead of chapters is the first style she implements to convey her story in the way she wants to. To capture our attentions and help us get used to this unusual style, Walker's first 6 letters are especially effective and revealing. These letters cover a huge period of time. The gap between Letters 1 and 2 for instance is at least a year. She also reveals to us characters and themes that will run throughout the entire novel and also forms a bond between the reader and the narrator due to the letter style. The first writing style Walker uses to get important information across in the first 6 letters is her use of short, emphatic sentences. These convey the information quickly whilst also shocking us and therefore grabbing our attention. ...read more.

Celie first sees Shug in this letter. Shug becomes a role model and also a symbol of rebellion against oppression for Celie. "She grinning with her foot up on somebody motorcar.... I dream of Shug Avery". When referring to Shug though, she reveals again her extreme lack of self esteem "She bout ten thousand times more prettier then me". Pa is also introduced in these first letters and becomes the "shape" or stereotype Celie applies to all men she encounters. Pa is oppressive, malicious and tyrannical "He beat me today because he say I winked at a boy in church" (Letter 5) "I see him looking at my little sister". He is also violent and ruthless "He took (my baby) while I was sleeping. Kilt it out there in the woods." (Letter 2) His role in the first 6 letters is mainly to shock the reader and add effect to the opening. The reader also responds to his injustices towards Celie by forming a stronger bond with her. Another important character introduced is Mr._____. He is Nettie's boyfriend by letter 4 but will later on end up marrying Celie. ...read more.

Celie writes her letters in secret due to the warning from Pa at the beginning of the book "You better not never tell nobody but God. It'd kill your mammy." Celie feels she can only tell God her problems as she is fearful of Pa and what he will do to her if anyone finds out about the rape. In conclusion, Alice Walker opens her novel with 6 very effective letters that fully involve the reader in the story. Her use of the letter/diary style plays on the reader's emotions and directs the reader's sympathy towards the main character. Celie's naivety and also her poor, blunt and shocking writing style have a similar effect. The letters are used effectively by Walker as a way of spanning many years in a few pages. Walker also introduces and develops the main characters in the first 6 letters with great effect. These characters in turn are used by Walker to introduce important themes which are to be conveyed. The themes of Roles of Women, Religion, Sisterhood and Hiding are all born and begin to develop in the first few pages of the novel, making the letters more interesting for the reader and in turn more effective as an introduction. Richard Potter ...read more.