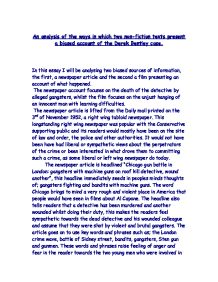 An analysis of the ways in which two non-fiction texts present a biased account of the Derek Bentley case.

An analysis of the ways in which two non-fiction texts present a biased account of the Derek Bentley case. In this essay I will be analysing two biased sources of information, the first, a newspaper article and the second a film presenting an account of what happened. The newspaper account focuses on the death of the detective by alleged gangsters, whilst the film focuses on the unjust hanging of an innocent man with learning difficulties. The newspaper article is lifted from the Daily mail printed on the 3rd of November 1952, a right wing tabloid newspaper. This longstanding right wing newspaper was popular with the Conservative supporting public and its readers would mostly have been on the site of law and order, the police and other authorities. It would not have been have had liberal or sympathetic views about the perpetrators of the crime or been interested in what drove them to committing such a crime, as some liberal or left wing newspaper do today. ...read more.

It goes further to tell us that detective constable Miles was married with two children; it states "he was killed" which immediately makes us picture a grieving widow and two fatherless children, fuelling the readers anger even more. This article was printed without the facts being known, it exaggerates greatly using melodramatic language like; gangsters and bandits when they were just youths causing trouble. It calls the gun a machine gun and suggests that there is more than one gun when the truth is it was only one hand gun. It also calls the incident a battle which makes readers picture many gangsters fighting the two lone officers, when the reality is only one of the boys, Christopher Craig, had a gun. In 1952 most people only had a wireless in their homes, not many people had televisions, so newspaper were one of the only sources of information available to the public and people tended to believe that what was printed was the truth. ...read more.

The whole first scene is shown with him in it. As he is the main character, he will become well-known to us, so in the end our sympathy will be placed on him. The music played when Derek is on the screen contains a harp. The harp is linked with purity and angels which suggests to the audience that Derek is innocent. Derek's favourite song that he listens to over and over in the film is called ' wheel of fortune' , and the lyrics refers to a fortunate destiny for the singer. The song shows us that Derek feels hopeful about his future, but the audience knows the sad and unjust destiny does await him. The lighting used by the camera man is very suggestive of good and evil; shoots of Derek are lit brightly by white light, while Craig is filmed with a much shadowy lighting. This is very clever because physiologically we associate bright light with all that is good, and shadows and darkness with evil and badness. The director uses this technique very well on the audience. ?? ?? ?? ?? ...read more.

There is some good analysis of both sources in this response; however there is not enough cross over made between the two sources to make this a comparative essay. You need to make a point about one and then find a way to link to the other source.