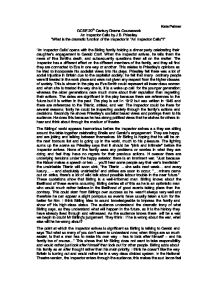 Kate Palmer GCSE 20th Century Drama Coursework An Inspector Calls by J.B. Priestley "What is the dramatic function of the Inspector in "An Inspector Calls"?" 'An Inspector Calls' opens with the Birling family holding a dinner party celebrating their daughter's engagement to Gerald Croft. When the Inspector arrives, he tells them the news of Eva Smiths death, and subsequently questions them all on the matter. The Inspector has a different effect on the different members of the family, and they all find they are connected to Eva in one way or another. This relates to Priestley's opinions as he tried to incorporate his socialist views into his plays. Priestley felt there was a lot of social injustice in Britain due to the capitalist society; he felt that many ordinary people were ill treated in the work place and were not given any respect from the higher classes of society. This is shown in the play as Eva Smith could represent all lower class women and when she is treated the way she is, it is a wake up call for the younger generation; whereas the older generations care much more about their reputation than regretting their actions. The dates are significant in the play because there are references to the future but it is written in the past. ...read more.

This quote shows how self-centred he really is. Mr and Mrs Birling represent the middle class of the present. Priestley is trying to say that this is how the middle class act and this depiction shows how self centred and arrogant Priestley thinks they are. Priestley tries to summarise all the middle class by these two characters and how they react to the Inspector and the situations faced by them. Mrs Birling has a very similar reaction to Mr Birling as she doesn't see what she has done wrong, or that the girl should have lived a better life. She says "But I accept no blame for it at all." This quote also proves how she doesn't want to take responsibility for her actions and would rather lay the blame with someone else. Gerald, Sheila, and Eric have rather different reactions after finding out what they have done. The younger three represent the future classes; to a certain extent they show remorse although they do not all change their ways drastically. The Birlings seem to be changed permanently and that signifies the changing of society. Gerald's reaction is that he says, "Sorry - I - well, I've suddenly realised that she's dead -." This quote shows that it has had some impact on his life and his conscience. ...read more.

I think Priestley hoped that his audience would feel guilty and that they would change their lives as a result of the play. I think Priestley intended for the Inspector to make people wonder about who he was and where he came from. The inspector could represent a number of different things and people: god; Daisy Renton/Eva Smith's child; individual conscience; a ghost and this makes the inspector much more personal as it is one's own opinion as to what he really is. I think Priestley wants the Inspector to prey on the audience's conscience and make them feel guilty for the way they have acted and will change their future opinions and actions. Priestley wants the audience to be affected in the same way the younger generation of the Birling household was. I imagine the Birlings could represent every middle class household in Britain; with the same views and opinions, and same approach to responsibility. Saying this, I feel that Priestley thought that the audience would hope they were like the younger generation and more open to change rather than the older who were self centred and arrogant. I think Priestley's aim is to put his views across about social injustice through the medium of theatre. Priestley felt very strongly about such things as lower class working conditions, and "cheap" labour; thus he felt this was one of the ways he could put his point of view across to the people of influence. ...read more.