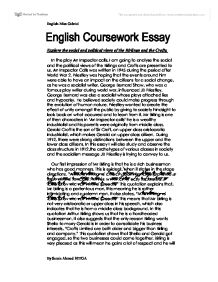 An Inspector Calls. Explore the social and political views of the Birlings and the Crofts.

Explore the social and political views of the Birlings and the Crofts. In the play An Inspector calls, I am going to analyse the social and the political views of the Birlings and Crofts are presented to us. An Inspector Calls was written in 1945 during the period after World War 2. Priestley was hoping that the events around him were able to have an impact on the citizens for a social change, as he was a socialist writer. George Bernard Shaw, who was a famous play writer during world war, influenced JB Priestley. George Bernard was also a socialist whose plays attached lies and hypocrisy. He believed society could make progress through the evolution of human nature. Priestley wanted to create the effect of unity amongst the public by giving to society hindsight to look back on what occurred and to learn from it. Mr Birling is one of then characters in 'An Inspector calls' he is a wealthy industrialist and his parents were originally from middle class. Gerald Croft is the son of Sir Croft, an upper class aristocratic industrialist, which makes Gerald an upper class citizen. During 1912, there were strong distinctions between the upper and the lower class citizens. In this essay I will also study and observe the class structure in 1912,the archetypes of various classes in society and the socialism message JB Priestley is trying to convey to us. Our first impression of Mr Birling is that he is a rich businessman who has good manners. This is evident, when it states in the stage directions. "Arthur Birling is a heavy looking rather portentous man in his middle fifties with fairly easy manners but rather provincial in his speech." This quotation explains that, Mr birling is a portentous man, this meaning he is rather intimidating and a solemn man. It also states, "Mr Birling is rather provincial in his speech." ...read more.

Inspectors Goole's name is the same as a ghoul a spirit of even a ghost. The name makes the inspector sound ghostly and he seems very confident when he is questioning the Birling's. When the inspector walks into the room he is seems to be a very big man when he isn't. The inspector creates a purposefulness impression on the Birling Family. We then know that the Inspector has come for a specific reason and he is very sharp and has a lot of power over the Birling family. The inspector is also used to convey a message such as Priestley's views. He also makes it seem that socialism is the true and honest way to live your life. In this speech he also states that for the lower class, "Eva Smiths and John Smiths" there is a "chance of happiness" in socialism. The Inspector also makes the audience realise that they are "members of one body" and they should try their best to help people like Eva Smith in the future. After they ring the police station Birling gets triumphant because there is no police inspector on the committee with the name Inspector Goole. When Birling is celebrating he says, "The whole stories just a lot of moonshine. Nothing but an elaborate sell! (He produces a huge sigh of relief.)" This over joys Mr Birling. Also during Gerald's suggestion that Goole was a fake Birling speaks "eagerly, triumphantly, jovially and heartily" these stage directions indicate that Mr Birlings mood has changed from angry and bitter to relaxed and relieved and now he believes that all of Goole's story was false and now therefore it has no meaning to him. This is typical of Mrs Birling's selfish character. Here there is a difference between the younger and older generation. The older generation are more capitalists and more greedy because they want to own every thing, this is a typical example of Mr Birling he is a stereotypical character. ...read more.

Even though she had turned down Eva's case, which was very important since Eva was pregnant and there was no father for the child present. Mrs Birling makes many comments to defend herself but she's is just making it bad for Eric, without knowing. She does this by saying, "Secondly, I blame the young man who is the father of the child, she was going to have." Eva also didn't want to take money form Eric because it was stolen, so she could not support herself and the child so she stopped taking money and she became poor. Mrs Birling has her own doubts she says, "As if a girl of that sort would ever refuse money!" Mrs Birling is very stereotypical because she just thinks that the lower class are really desperate for money and would never say no to money no matter if it was stolen of not. She judges people by their social class. Eva was from a lower class and did not take any of the stolen money, so Mrs Birling is wrong to think that such people are thieves. The views of The Birlings and the Croft's are the typical of people during that certain time era. There were characters such as Mrs Birling whose views are based on the social status of a person. The social and political views of a person vary form character to character. Overall, Birling is a very self centred character who is incapable of learning the moral lesson that Inspector Goole tried to tech him. Sheila is essentially the good character, as she will deeply regret what she had done to the girl. This was one of the ways Priestley wanted to show that human beings have a generous side to them. He also wanted people to develop a social conscience and that we are all the members of one body. An inspector calls is a play which conveys a clear and a moral message to the society. Priestley had used inspector Goole to send his views to the society to change. English-Miss Gabriel By Samia Ahmed 10T/GA ...read more.