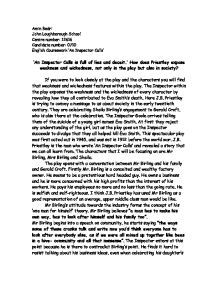 'An Inspector Calls is full of lies and deceit.' How does Priestley expose weakness and wickedness, not only in the play but also in society?

Amin Bedri John Loughborough School Centre number: 12616 Candidate number: 0710 English Coursework 'An Inspector Calls' 'An Inspector Calls is full of lies and deceit.' How does Priestley expose weakness and wickedness, not only in the play but also in society? If you were to look closely at the play and the characters you will find that weakness and wickedness features within the play. The Inspector within the play exposes the weakness and the wickedness of every character by revealing how they all contributed to Eva Smith's death. Here J.B. Priestley is trying to convey a message to us about society in the early twentieth century. They are celebrating Sheila Birling's engagement to Gerald Croft, who is also there at the celebration. The Inspector Goole arrives telling them of the suicide of a young girl names Eva Smith. At first they reject any understanding of the girl, but as the play goes on the Inspector succeeds to divulge that they all helped kill Eva Smith. This spectacular play was first acted out in 1945, and was set in 1912 before the world war. J.B. Priestley is the man who wrote 'An Inspector Calls' and revealed a story that we can all learn from. ...read more.

Mrs Birling was being accused of turning Eva Smith away from the 'Brumley Women's Charity'. Mrs Birling's excuse was that it was because Eva had called herself Mrs Birling. Mrs Birling felt very confident that she doesn't know anything about Eva Smith and that the Inspector cannot find any involvement with her. "I shall be glad to answer any questions the Inspector wishes to ask me. Though naturally I don't know anything about this girl." The Inspector reveals Mrs Birling's wickedness showing she has no guilt or remorse. But she is still unsympathetic towards her saying, "she only has herself to blame." Mrs Birling belonged to a charity organisation was there to help people but on the contrary to this she turned Eva smith away. Mrs Birling shows no remorse or sympathy towards Eva Smith's death. She poured scorn because she was an ordinary working class woman. I also think she is trying to take the blame off of herself. She says, "Therefore, you're quite wrong to suppose I shall regret what I did." The inspector tries to make her reflect on what she has done to Eva Smith by saying "I think you did something terribly wrong - and that you're going to spend the rest of your life regretting it." ...read more.

This gives an unmistakable contrast between Eric and Sheila and their parents who do not learn at all. Priestley wants to show and would hope that the younger generation of today realises that they can change their society. The inspector (the voice of Priestley) summarises when he says, "We don't live alone. We are members of one body. We are responsible for each other." Priestley has shown the huge detachment between the classes were in the early 20th century. Priestley wants to show us the great significance of helping each other; the Birling family was an example of how not to act. Priestley's message to the reader was conveyed very well. The story's moral can be understood clearly and makes the reader come to their senses. Priestley has also shown within the story how he feels the circumstances can be changed. 'An Inspector Calls' has been so effective because of the fact Priestley has included an interesting story line as well as bringing his readers a message. J.B. Priestly has conveyed a message within his story and we should all benefit from it, anyway possible. He shows how certain people get manipulated and we should treat people the same regardless of their, gender, race or religion. Priestly wanted to get this moral across, I think he did, but unfortunately there will always be people like the Birling's. ...read more.