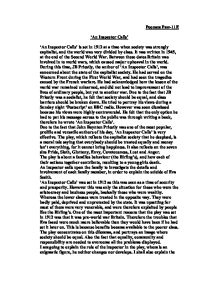 'An Inspector Calls' is set in 1912 at a time when society was strongly capitalist, and the world was very divided by class. J B Priestly

Poonam Paw-11E 'An Inspector Calls' 'An Inspector Calls' is set in 1912 at a time when society was strongly capitalist, and the world was very divided by class. It was written in 1945, at the end of the Second World War. Between these dates Britain was involved in to world wars, which caused major upheaval in the world. During this time, JB Priestly, the author of 'An Inspector Calls', was concerned about the state of the capitalist society. He had served on the Western Front during the First World War, and had seen the tragedies caused by the French warfare. He had acknowledged how the lesson of the world war remained unlearned, and did not lead to improvement of the lives of ordinary people, but yet to another war. Due to the fact that JB Priestly was a socialist, he felt that society should be equal, and class barriers should be broken down. He tried to portray his views during a Sunday night 'Postscript' on BBC radio. However was soon dismissed because his views were highly controversial. He felt that the only option he had to put his message across to the public was through writing a book, therefore he wrote 'An Inspector Calls'. Due to the fact that John Boynton Priestly was one of the most popular, prolific and versatile authors of his day, 'An Inspector Calls' is very effective. ...read more.

I feel that the 'Inspector' could be playing the role of a confessor. He tries to draw their confessions by playing with their minds through constantly asking open questions. 'And so you used the power you had, as a daughter of a good customer and also of a man well known in town, to punish the girl just because she made you feel like that?' 'Are you sure you don't know?' Also the way he asks 'was it or was it not your influence? He encourages each character to acknowledge their guilt and responsibility for Eva's death and to repent. This action is shown through the way he questions Eric 'you mean you stole the money?' Not only does he expertly draw confessions from people he also portrays an image of a supernatural being. He seem to have premonitions for he states 'I think you did something terribly wrong, and you're going to spend the rest of your life regretting it'. He seems to be able to forecast and acts in an omnipotent manner. This is shown when he is talking about Eva and her employment with Milwards, where he states 'that's what she thought'. The most obvious reason why he can be envisaged as a supernatural being like a malevolent spirit or ghost is because of his name, 'Inspector Goole'. ...read more.

For throughout the play the inspector undermines their complacent assumption that they are respectable citizens, and points out that when social responsibilities become greater as privileges increase. Also because the play concentrates on the need for a change. The fact that everybody should be treated equally, and that we should not be selfish. This is emphasised in the quote 'you see, we have to share something. If there's nothing else, we'll have to share our guilt.' It is obvious that the author didn't want to send a single interpretation. We are left not knowing who the inspector really is. We know that he is not a real inspector, for this is revealed at the end of the play, when the Birling's hone the police station to enquire about the inspector, and they are told he is non-existent. Due to the inspectors identity not being revealed we have to judge for ourselves on who we think he really is. I think that the inspector in JB Presley's 'An Inspector Calls' is God. This is because he is a moral influence who makes the characters judge themselves. He gives them a change to own up and the characters that decline to change and learn the least from the experience will be forced to go through procession until they face up to their guilt. Also because unlike the others, he does not deviate from his moral position, and can foretell the future. ...read more.